US will not pay security bill for Duke and Duchess, says Trump

Harry and Meghan ‘must pay’ for themselves after leaving Canada, says US president 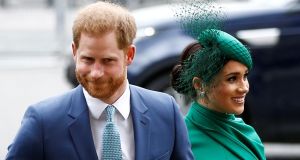 The Duke and Duchess of Sussex Harry and Meghan are walking away from the monarchy on March 31st. Reuters: Henry Nicholls/File Photo/Reuters

Donald Trump has said the United States will not pay for the Duke and Duchess of Sussex’s security protection after they reportedly moved to California.

Harry and Meghan were said to have left their rented home in Vancouver, Canada, and took a private flight to the US before the border closed between the two countries last week.

In response to the reports, the US president tweeted that he was a “great admirer of the Queen and the United Kingdom” as he said that the US would not pay the royal couple’s security bill, adding: “They must pay!”

Mr Trump said on Twitter: “I am a great friend and admirer of the Queen & the United Kingdom.

“It was reported that Harry and Meghan, who left the Kingdom, would reside permanently in Canada.

“Now they have left Canada for the U.S. however, the U.S. will not pay for their security protection. They must pay!”

I am a great friend and admirer of the Queen & the United Kingdom. It was reported that Harry and Meghan, who left the Kingdom, would reside permanently in Canada. Now they have left Canada for the U.S. however, the U.S. will not pay for their security protection. They must pay!

Harry, Meghan and baby Archie are now said to be living in lockdown close to Hollywood in accordance with the sunshine state’s Covid-19 containment measures.

The tweet by Mr Trump comes just days before the couple are due to officially step down as senior royals — dubbed “Megxit”.

Sixth in line to the throne Harry and American former actress Meghan Markle are walking away from the monarchy for a life of personal and financial freedom on March 31st.

Controversy over the cost of protecting the soon-to-be ex-senior royals in their new global life has continued to grow, as it remains unclear who will pay for their security.

It is feared UK taxpayers will have to foot the bill for their close personal protection officers, but it could be the Sussexes themselves, the Queen or the Prince of Wales who may have to pay.

Officials in Canada, the Commonwealth country the couple had planned to make their base, said they would not foot the bill for the family’s security arrangements.

The Royal Canadian Mounted Police previously confirmed it will stop providing protection for the Sussexes once they cease to be senior royals.

Neither Buckingham Palace nor the Home Office will confirm details but the bill is estimated to be as much as £20 million a year.

Earlier this month, Harry - who has asked not to be called a prince anymore and prefers to be referred to by his first name - was apparently tricked into criticising Mr Trump during a hoax call.

In reports of the conversations, Harry said Mr Trump had “blood on his hands” in relation to the climate crisis; that the British political system was “broken”, and that his decade serving in the military had made him “more normal than my family would like to believe”.

A spokeswoman for the Sussexes declined to comment when asked if there was any doubt the voice was that of Harry. - PA

US police officer who knelt on the neck of George Floyd arrested 18:54
Greece to follow Croatia and Montenegro in opening borders for tourists 17:45
Return of cross to rebuilt Prussian palace vexes some Berliners 17:35
Fire extinguisher: Two-thirds of Dutch teens would not sleep with a smoker 16:21
Coronavirus: Number of global cases approaches 6 million 16:18