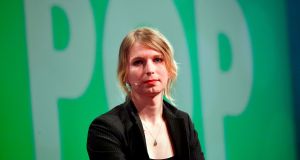 Former US army intelligence analyst Chelsea Manning has been hospitalised after she attempted suicide on Wednesday, according to her lawyers.

Manning (32), who was jailed last year for refusing to testify before a grand jury that is investigating WikiLeaks, is recovering, according to her lawyers.

Manning has been held at a detention centre in Alexandria, Virginia, since May. The Alexandria Sheriff’s Office confirmed only that there was “an incident” involving Manning at 12.11pm. at the detention centre and said, “It was handled appropriately by our professional staff and Ms. Manning is safe.”

A statement from Manning’s legal steam said she was still scheduled to appear Friday at a hearing before Judge Anthony Trenga of the US District Court for the Eastern District of Virginia.

At the hearing, the judge is expected to rule on whether to end the civil contempt sanctions imposed on Manning after she refused to testify before a grand jury investigating the publication of thousands of American military and diplomatic files that she had provided to WikiLeaks in 2010.

Manning was also detained for two months starting in March 2019 for refusing to testify, then briefly released when that grand jury’s term ended – taking advantage of the window to announce that she had a deal to write a book deal that she said would focus on her personal life.

But prosecutors subpoenaed her again for testimony before a new grand jury, and she again refused to testify and was locked up again.

The grand jury investigation is part of a long-running inquiry into WikiLeaks and its founder, Julian Assange, that dates to the Obama administration and which the Trump administration revived.

Manning has said that when she appeared before the grand jury, prosecutors asked her a series of questions about WikiLeaks, but she had responded to every question by saying it violated her constitutional rights.

Although prosecutors in the Eastern District of Virginia granted immunity for her testimony, Manning had vowed not to co-operate in the investigation, saying she had ethical objections. A federal judge ruled that she must stay in civil detention until she testified. – New York Times

1 Trump turns to bible for photo op as DC burns around him
2 Covid-19: Easing of restrictions ‘unlikely’ to be speeded-up
3 Large gatherings reported throughout State on bank holiday
4 ‘Frustrated and angry’: Thousands march in Dublin to protest death of George Floyd
5 US protests continue amid curfews, arrest threats and plea from George Floyd’s brother
Real news has value SUBSCRIBE