Trump boasts of coronavirus ‘ratings’ as top expert warns of up to 200,000 US deaths

US president Donald Trump has called on New York authorities to look into increased demands from hospitals for face masks during the coronavirus pandemic. Video: Reuters 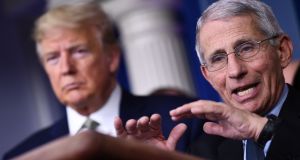 Dr Anthony Fauci, the leading immunologist in the US, speaking alongside President Donald Trump at a March 17th press briefing. Photograph: Brendan Smialowski/AFP via Getty Images

Coronavirus cases in the United States continued to rise over the weekend, as the country’s top immunologist warned that deaths from the virus could hit 200,000.

Dr Anthony Fauci, head of the national institute of allergy and infectious diseases, said that while the figure was still a “moving target”, there could be between “100,000 and 200,000” deaths.

Late last night, US president Donald Trump extended federal guidelines on the coronavirus to the end of April, following the warning.

“Because the ‘Ratings’ of my News Conferences etc. are so high… the Lamestream Media is going CRAZY,” he tweeted.

Mr Trump delivered conflicting messages about possible responses to the crisis over the weekend.

On Saturday evening he confirmed that New York and parts of New Jersey and Connecticut would not be entering quarantine, reversing comments earlier in the day when he said he was considering the measure, despite doubts over his authority to do so.

“President Trump is a ratings hit. Since reviving the daily White House briefing Mr. Trump and his coronavirus updates have attracted an average audience of 8.5 million on cable news, roughly the viewership of the season finale of ‘The Bachelor.’ Numbers are continuing to rise...

As he left Washington for Virginia to witness the departure of a Navy hospital ship for New York, where it will help with hospital efforts in the city, Mr Trump said he was considering ordering a quarantine.

“We’re looking at it and we’ll be making a decision. A lot of states who don’t have a big problem have asked me about it,” he said on Saturday, noting that there is concern about citizens leaving New York and going to other states like Florida. It followed his discussions with governors, including Florida’s governor Ron DeSantis.

But the decision appeared to blindside New York governor Andrew Cuomo who said he knew nothing about it. “I don’t even like the sound of it,” he said when he first heard of Mr Trump’s comments at a press conference. He later described the idea as “preposterous”.

There were signs of growing tensions between states in the northeastern part of the country as the number of coronavirus cases continued to rise, with New York remaining the epicentre.

“New York City is a hot spot, their infection rate is skyrocketing, and they are so close to Rhode Island,” she said. But Mr Cuomo hit back, warning that he would sue the state.

The number of cases in New York state was close to 60,000 as of Sunday evening, more than half of which were in the city.

“His denial at the beginning was deadly,” she said in an interview on Sunday. “We cannot continue to allow him to continue to make these underestimates of what is actually happening here.”