Coronavirus: UK will not return to normal for ‘at least six months’ 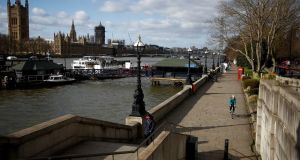 It will be at least six months before Britain gets “back to normal” by lifting the restrictions imposed because of coronavirus, the country’s deputy chief medical officer has said. Jenny Harries told a press conference in Downing Street that it would take a couple of weeks to see if the measures imposed last week had been effective in reducing deaths from the virus.

“We actually anticipate our numbers will get worse over the next week, possibly two, and then we are looking to see whether we have managed to push that curve down and we start to see a decline,” she said.

“This is not to say we would be in complete lockdown for six months, but as a nation we have to be really, really responsible and keep doing what we’re all doing until we’re sure we can gradually start lifting various interventions, which are likely to be spaced – based on the science and our data – until we gradually come back to a normal way of living.”

A total of 1,228 people in Britain have died from the coronavirus, an increase of 209 since Saturday. Cabinet office minister Michael Gove said on Sunday that criticism of Britain’s decision not to conduct widespread testing for the virus should wait until after the epidemic was over.

“It’s certainly the case the Germans have had success in testing. There are other countries that are also ramping up testing. But the acceleration here in the UK is significant,” he told Sky News.

“But frankly, the most important thing is not to look backwards but forwards and do everything to increase the number of tests. Once this epidemic is over there will be an opportunity to look back and learn the lessons.”

Germany has recorded 52,547 cases of the coronavirus – compared with just 19,522 in Britain – but just 389 deaths, less than a third of the British toll. Former UK prime minister Tony Blair said Britain should step up its testing regime to the point where virtually everyone in the country could be tested.

“Your risk, obviously, is as you start to ease the lockdown, how do you then deal with any resurgence of the disease? This, of course, is what they’re now dealing with in China and South Korea, and elsewhere,” he said.

“Unless you have that testing capability that you can apply at scale – and by the way, when I say mass testing, I mean, I actually think you will need to get to the point where you’ve got the capability, and I assume we’re preparing for this now, of testing literally a very large proportion of the entire population.”

Mr Gove will on Monday co-chair the first meeting of the joint committee to oversee the implementation of Britain’s withdrawal agreement with the European Union. The EU will be represented at the meeting, which will be conducted by video link, by European Commission vice-president Maros Sefcovic.

Negotiations on the future relationship between the UK and the EU have been stalled by the coronavirus crisis but Downing Street insists the UK will not seek an extension to the transition period, which ends on December 31st.