‘I believed that Brett was going to accidentally kill me’ 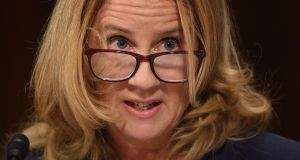 Christine Blasey Ford gave her first public account of what happened at a house party in the early 1980s, when she was 15 and Brett Kavanaugh 17. Photograph: Saul Loeb-Pool/Getty Images

Washington witnessed one of the most dramatic days of testimony in recent years on Thursday as supreme court nominee Brett Kavanaugh and his accuser testified back-to-back to the Senate judiciary committee about an alleged sexual assault.

As protesters and supporters representing both sides gathered outside the Senate building, located just metres from the US supreme court, Christine Blasey Ford began her testimony under oath just after 10am.

Flanked by her lawyers, the California-based university professor gave her first public account of what happened at a house party in the early 1980s, when she was 15 and Kavanaugh 17.

Blasey Ford, a married mother of two, described how she went upstairs to use the bathroom and claimed Kavanaugh and his friend, Mark Judge, pushed her into a bedroom. After locking the door, Kavanaugh pushed her on to the bed, tried to rip her clothes off and put his hand over her mouth as she screamed, she said.

“It was hard for me to breathe and I believed that Brett was going to accidentally kill me,” she told senators.

She said that she made eye contact a “couple of times” with Judge during the attack and thought he might try to help her – “but he did not”.

Asked what was her strongest memory from the incident she said, “the uproarious laughter between the two, and their having fun at my expense”. The memory, she said, was “indelible”.

She recalled meeting Judge six to eight weeks after the attack at a local supermarket where he worked, and that he looked “very uncomfortable”.

She said she was “100 per cent sure” that Kavanaugh was the man who attacked her.

Though at times emotional, and admitting that she was “terrified”, Blasey Ford emerged from the hearing as a credible witness. At times she drew on her academic background as a psychology professor, describing in technical terms how memories of traumatic events are processed in the brain.

The Republican senators’ decision to hire an outside legal counsel, Rachel Mitchell, to question the accuser appeared to backfire. While Mitchell questioned Blasey Ford, she was frequently interrupted to allow Democratic senators to pose their questions.

She also focused on Blasey Ford’s alleged fear of flying and hinted that she did not pay for a polygraph herself, a line of questioning that yielded little concrete new evidence from the accused.

But 45 minutes after Blasey Ford finished her testimony, it became clear that Kavanaugh was ready to fight back. Delivering his opening testimony in a raised voice – at times shouting – he vigorously denied the accusations against him and chastised the committee for conducting a “circus”.

“I am innocent of this charge,” he said.

“The constitution gives the Senate an important role in the confirmation process, but you have replaced ‘advice and consent’ with ‘search and destroy’,” he said.

In her opening question to Kavanaugh, Mitchell focused on his friendship with Judge, the man who allegedly witnessed the disputed incident. Judge, a writer, has written about his heavy drinking in his college and high school years.

Kavanaugh said he sees Judge only “once in a while” now.

Democratic members of the committee – as well as Blasey Ford – reiterated their calls for Judge to be subpoenaed. Kavanaugh claimed that a friend of Blasey Ford, who she alleges was at the party in question, had said that she had no memories of the event.

As Kavanaugh’s testimony stretched into the evening, there was a growing sense that Republicans were emboldened by their nominee’s testimony.

All the while, US president Donald Trump was watching events unfold from the White House. Amid speculation that the Trump administration could be lining up a replacement candidate, ultimately the fate of Kavanaugh lies at the mercy of the 45th president of the US and the handful of senators who have yet to endorse him.

1 Crowds gathering in Dublin city centre ‘ugly image’ for the capital, say vintners
2 Kanye West says he will run for US president in 2020
3 Ireland’s weather: Warning of disruption as wind alert issued for 19 counties
4 Gardaí find Dublin business selling alcohol but claiming to be a restaurant
5 Ryan confirms travel ‘green list’ will come in after July 20th
Real news has value SUBSCRIBE