Kavanaugh vote expected to go ahead after day of high drama 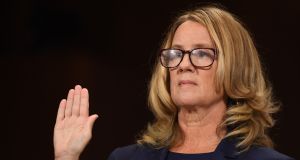 Christine Blasey Ford is sworn in before testifying during the Senate judiciary committee hearing on the nomination of Brett Kavanaugh to the US supreme court. Photograph: Saul Loeb/EPA

Republicans on Thursday night indicated they intend to move forward with a vote on US supreme court nominee Brett Kavanaugh, after an extraordinary day of dramatic testimony on Capitol Hill.

Christine Blasey Ford, the woman who has accused the federal judge of sexually assaulting her when she was 15, was questioned for more than three hours by the Senate judiciary committee. In an emotional, but fiercely authoritative testimony, she described in detail an attack she alleges took place at a party.

“It was hard for me to breathe and I believed that Brett was going to accidentally kill me,” she told the committee.

Asked if her accusations could have been a case of “mistaken identity”, she replied, “Absolutely not.”

Her most powerful memory from the incident, she said, was “the uproarious laughter” between Mr Kavanaugh and his friend Mark Judge who she says witnessed the attack.

But her accused, Brett Kavanaugh, vehemently defended his reputation and refuted the allegations in his afternoon testimony to the committee. “My family and my name have been totally and permanently destroyed,” he said, describing the confirmation process as a “national disgrace”.

Republican senators were due to meet after the hearing concluded to decide the next steps.

Delivering his opening statement in angry tones, he denounced the “circus” of the past two weeks as a “calculated and orchestrated political hit, fuelled by pent-up anger at president Trump and the 2016 election”.

Though he broke down at various points, he remained defiant. “You might defeat me in the final vote, but you will never get me to quit.”

The highly anticipated hearing could have profound implications for president Trump’s political agenda and quest to appoint a second Supreme Court justice. If confirmed, Mr Kavanaugh is likely to tilt the political hue of the Supreme Court to the right, possibly for decades. Republicans are also wary of delaying the process past the mid-term elections, amid concerns that Democrats could win control of the Senate and block any Trump nomination.

Despite speculation that the White House was lining up judge Amy Coney Barrett as a possible replacement candidate, Mr Trump appeared to be backing Mr Kavanaugh last night.

But with Republicans only holding a slim majority in the Senate, Mr Kavanaugh’s future may ultimately lie in the hands of three Republican senators who have not yet given him their endorsement: Jeff Flake, Susan Collins and Lisa Murkowski.

In an indication of the stakes at play, senator Lindsey Graham urged his Republican colleagues to endorse Kavanaugh.

“If you vote no, you are legitimising the most despicable thing I’ve ever seen in politics.”

Coronavirus: France, Spain and UK suffer highest daily death tolls 20:25
Coronavirus: Ugandans prepare for a new war as clampdown takes hold 19:28
Coronavirus: British government admits it must ramp up testing 19:09
Belarusian leader prescribes sport, sauna and vodka to beat Covid-19 17:32
Irish in Peru: ‘There are people still stuck here and they need not to forget about us’ 08:25