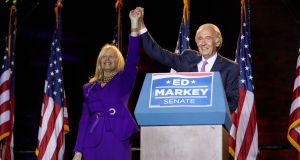 Senator Ed Markey staved off a Democratic primary challenge from Joe Kennedy III on Tuesday, the first time a member of the Kennedy family has lost a state wide race in Massachusetts.

Mr Kennedy (39) – the grandson of Robert Kennedy – announced a bid for the Senate seat occupied by Mr Markey last year. But despite Mr Kennedy leading in early polls, Mr Markey’s support surged in recent weeks, boosted by high-profile endorsements from progressive figures such as Alexandria Ocasio-Cortez.

Mr Markey (74), who was an early supporter in Congress of liberal policies such as the Green New Deal, also benefited from a strong social media campaign.

Mr Kennedy phoned Mr Markey to concede just two hours after polls closed. The incumbent led his younger rival by 55 per cent to 45 per cent when the result was called.

“Tonight is more than just a celebration of a movement,” Mr Markey said in his victory speech in Malden, Massachusetts. “It is a reaffirmation of the need to have a movement, a progressive movement, of young people demanding radical change, demanding justice.”

Mr Kennedy told his supporters he would “do this again with all of you in a heartbeat.”

“To my family ... whose name was invoked far more often than I anticipated in this race ... You are my heroes,” he said.

The race had divided leading Democrats, with some of the biggest names in politics choosing sides in the contest. In a big boost to Mr Markey, Elizabeth Warren, the other senator for Massachusetts, endorsed her colleague, despite Mr Kennedy supporting his former professor at Harvard in the Democratic presidential race. In contrast, House of Representatives speaker Nancy Pelosi backed Mr Kennedy.

US president Donald Trump weighed in on the race on Twitter on Wednesday. “See, even a Kennedy isn’t safe in the new Radical Left Democrat Party, Taxes up big, no 2A,” he wrote, a reference to the second amendment right to bear arms. “[Joe] Biden has completely lost control. Pelosi strongly backed the loser!”

The closely-watched contest had become increasingly negative in the weeks leading up to the election, with the Kennedy campaign accusing Mr Markey of running a “toxic” social media campaign.

Ms Ocasio-Cortez described Mr Markey’s victory on Tuesday as a “victory for the progressive movement, for 21st century policy, and for the Green New Deal”.

Mr Kennedy is the most high profile member of the Kennedy political dynasty in active politics, though Amy Kennedy, the wife of the late Ted Kennedy’s son, Patrick Kennedy, is running for Congress in New Jersey in November’s elections.

Another Irish-American, Richard Neal, co-chairman of the Friends of Ireland caucus on Capitol Hill, fended off a primary challenge from Alex Morse, the mayor of Holyoke. Mr Neal, chairman of the Ways and Means committee in the House of Representatives, won the primary in the first congressional district of Massachusetts and will be on the ballot in November.