Museveni deploys day of prayer in fight against coronavirus 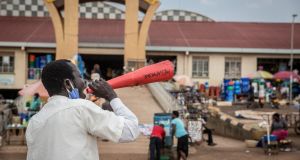 In Uganda, civilians are bracing for another lockdown, but instead of clarifying what to expect last week, the president announced a national day of anti-coronavirus prayer.

“A certain Ugandan came to me and told me that God had told him in a vision that I should organise national prayers for God to deliver us from Covid-19,” Yoweri Museveni tweeted. “Therefore, by the powers given to the president . . . I declare the 29th of August 2020 a day of national prayers and a public holiday. Stay in your houses or compounds and pray.”

After initial success in combating the virus amid one of the strictest lockdowns in Africa, Uganda is approaching 3,000 confirmed Covid-19 cases.

Mr Museveni, who has been in power since the 1980s, and is up for re-election early next year, has faced criticism for his obvious disconnection from millions of Ugandans, who have been struggling to survive since coronavirus restrictions deprived them of a way to make an income.

He banned food distributions, saying “opportunist” politicians would be charged with “attempted murder” if they tried to help their constituents that way. He later tweeted photographs of himself weighing a meal prepared by his staff, telling citizens to limit how much they eat and not consume “wastefully”.

On Saturday, a three-hour-long televised prayer service was introduced by minister of health Jane Aceng. “For sure this shows we are a nation that is committed to the Lord . . . The Lord has been good, so good, and we want to thank him for being good to us. We have lost 28 people, we have not lost the battle,” she said.

On the same day, outside the main market in the northern city of Gulu, Rwot Oyoro, who calls himself a “General of Jesus” from the Church of the Living Saviour, was preaching to passers-by. “God said the time will come when 10,000 people will die,” he shouted. “You should start praying.”

Mr Oyoro, who was carrying a Bible and using a piece of rolled-up card as a “megaphone”, told The Irish Times he believed the pandemic was the biggest message God had sent during his lifetime. “Like Noah’s ark. This is the punishment because people are thinking they can do anything.”

He said he felt obliged to inform people that they needed to repent. “God said he’s going to send the sickness of the devil . . . No one can do anything to stop it until people accept the word of God.”

In northern Uganda, there is still widespread belief in spirits and witchcraft. When the pandemic was spreading globally in March, many locals heeded Acholi tribal leaders who said it was important to wake up before sunrise and “chase the devil” away, by hitting pots and pans and shouting.

This region went through decades of war, causing people to turn to religion as a way to find solace. More than 99 per cent of Ugandans identify as religious. Some 84 per cent of the population is Christian and 14 per cent Muslim. Churches and mosques have been closed since March, as have schools.

“I miss it,” said Linda Adong, a 23-year-old born-again Christian who was selling bananas, close to where Mr Oyoro preached. “I’m missing praising the Lord with others. And Bible studies. I went three times a week.” Still, she said she was certain that God would save her from Covid-19. “I have no fear because God is there.”

1 Ireland could lose out as France lays claim to most of €5bn Brexit compensation fund
2 Q&A: What restrictions are going to be lifted next week?
3 Miriam Lord: The Dáil's answer to John Wayne overcooks the ham slice, by slice, by slice
4 400 – yes, 400! – Irish retailers for all your online Christmas shopping
5 Cross-Border restrictions unlikely as Ministers meet to discuss lockdown exit
Real news has value SUBSCRIBE