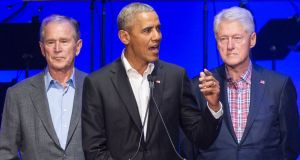 Former US presidents (from left) George W Bush, Barack Obama and Bill Clinton: All three have said that they will receive the coronavirus vaccine and would be prepared to receive the vaccine on camera in a bid to combat any public scepticism towards vaccination. Photograph: Jim Chapin/AFP via Getty Images

The United States passed another grim milestone as a record 2,885 coronavirus-related deaths were recorded on Wednesday – the highest daily number since the pandemic began.

Figures also show that 200,000 cases were registered across the country, the latest sign that the current pandemic shows no sign of abating in the United States.

The startling figures emerged as Dr Anthony Fauci, the country’s top immunologist, took issue with Britain’s swift approval of the Pfizer vaccine. “The UK did not do it as carefully and they got a couple of days ahead,” he said in an interview with Fox News.

“We have the gold standard of a regulatory approach with the FDA,” he said, a reference to the Food and Drug Administration agency, the main US regulatory body.

The FDA is due to meet next week to consider approval for the Pfizer vaccine, with a decision on the Moderna vaccine expected the following week. Officials have said that the US intends to vaccinate as many as 100 million people by February.

The meeting took place following US President Donald Trump’s decision last week to allow the transition process to officially commence, despite the fact that he is still refusing to accept the result of the presidential election.

Speaking ahead of the virtual meeting, Mr Fauci told CBS that he would have preferred the transition process to have started earlier. “I would have liked to have seen us getting involved with the team as early as we possibly can, because we want the smooth transition to occur,” he said. “Everyone believes that a smooth transition is certainly better than no transition.”

Mr Trump has made scant mention of the Covid-19 pandemic in recent weeks, despite the escalating infection numbers.

Asked at an event in the White House about revived negotiations on Capitol Hill about a pandemic relief plan, Mr Trump said he was confident a deal would be reached. But he spent most of the time, reiterating unsubstantiated claims of a “rigged” election.

“We went through an election. At 10 o’clock everybody said that was an easy victory for Trump. All of a sudden the votes started disappearing, miraculously disappearing,” he said.

“We found much of it. But we found far more votes than we need in almost all of these states,” he continued, noting that he received the most votes of any sitting president.

Asked if he still had confidence in attorney general Bill Barr, who said this week there was not sufficient evidence of voter fraud to change the outcome of the election, Mr Trump replied: “Ask me that in a number of weeks from now. They should be looking at all of this fraud. This is not civil. This is criminal stuff. This is very bad criminal stuff.”

In a further blow to Mr Trump’s efforts to undermine the election result, the Wisconsin supreme court declined to hear the Trump campaign’s challenge to the results in the election yesterday.

In contrast to Mr Trump’s reluctance to discuss the pandemic, all four former presidents – Jimmy Carter, Barack Obama, Bill Clinton and George W Bush – have said that they will receive the coronavirus vaccine.

Mr Clinton, Mr Bush and Mr Obama also said they would be prepared to receive the vaccine on camera in a bid to combat any public scepticism towards vaccination.

On Capitol Hill, house speaker Nancy Pelosi and top Senate Republican Mitch McConnell held talks about a government funding bill and a pandemic relief package, though Democrats and Republicans still remain far apart on the contours of a possible agreement.