Demand for mental health support doubles in some universities 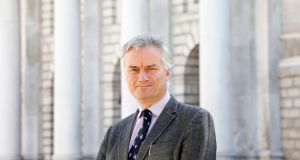 Dr Patrick Prendergast, Provost of Trinity College Dublin, told an Oireachtas education committee on Thursday that a lack of personal contact with other students was affecting the mental health and wellbeing of many students. Photograph: Alan Betson

Demand for mental health support in some universities has doubled as students struggle with isolation and the shift to online learning.

Dr Patrick Prendergast, Provost of Trinity College Dublin, told an Oireachtas education committee on Thursday that a lack of personal contact with other students was affecting the mental health and wellbeing of many students.

“Personal contact is what students most of all are missing . . . These are young students, ranging in age from 18 to mid-20s most. It’s a time of life when they should be meeting others,” he said.

“We find that there is a much greater need for psychiatric support and counselling. The head of our health service says numbers with mental health issues have doubled and his service has to respond to that.”

Dr Prendergast, who chairs the Irish Universities Association, which represents seven of the country’s universities, said the sector wanted to provide more of a campus experience for students in the new year.

“Our students tell us that they want more on-campus activity and we wholeheartedly agree,” he said.

He said the association has outlined ways it can provide this safely in the new year to Minister for Higher Education Simon Harris.

“This includes, not just classroom activity, but also some additional extra-curricular activities to enable students to have at least some limited level of on-campus experience in order to protect their welfare and mental health.”

University representatives also said they were willing to play their part in assisting with the national rollout of Covid-19 vaccines.

Dr Prendergast said universities had resources such as minus-90C fridges and were happy to assist by offering campus facilities in whatever way was deemed helpful by health authorities.

The association also confirmed that universities were estimated to be facing a combined deficit of at least €102 million between this academic year and the last.

Jim Miley, director-general of the association said this was down from a worst case scenario of up to €200 million.

“We’re hopeful now that’s closer to €100m. That’s based on us being in a much better position to predict that now,” he said.

Dr Joseph Ryan, chief executive of the Technological Higher Education Association, also the institutes of technology and technological university sector was facing similar losses, based on estimates from earlier this year.

He also pointed to the impact of Covid-19 restrictions on students and said colleges should be allowed to participate in sport and activity on campus in a safe and controlled way.

The fact that they were not permitted to do so was an anomaly, and its resumption would help boost the student experience and combat issues such as isolation.

Dr Ryan also said the sector was aiming to build up the capacity of new technological universities.

Cork Institute of Technology and IT Tralee are set to officially merge to form the Munster Technological University on January 1st next.

Other groups of institutes of technology have bids at various stages, including Limerick IT and Athlone IT, which is seeking to create a university for the midlands and midwest.

Prof Vincent Cunnane said the new entity would have a clear regional focus with a national and international outlook, which would benefit staff, students and the communities they serve.