Second vaccine may be authorised within ‘days’, says Swann 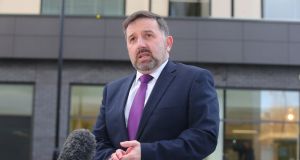 British medical regulators may be in a position to approve a second Covid-19 vaccine within days, the North’s Minister for Health Robin Swann has told the Stormont Assembly health scrutiny committee.

The Northern Executive also announced on Thursday evening that with the exception of “wet pubs” the current extended two-week lockdown will end next Friday (December 11th).

Next week, Northern Ireland is due to see the start of the rollout of the Pfizer/BioNTech vaccine, which was approved on Wednesday, with 12,000 mostly frontline health workers due to be immunised before Christmas.

Mr Swann told the Assembly’s health committee that a second vaccine could be authorised for use within “days” while adding that this was not a time for “societal complacency”.

“We must all remain vigilant to protect ourselves and the community around us,” he added.

The Northern Executive also met through much of Thursday to discuss the ending of the lockdown .The easing of restrictions means that after midnight next Thursday night the non-essential retail sector can reopen its shutters while close-contact service such as hairdressers and beauticians also will be back in business.

Hotels, cafes, restaurants and pubs that serve food also can open while churches will be permitted to hold Sunday services. Gyms also can open for personal training.

“We won’t have any further restrictions before Christmas and I hope that people will have personal responsibility,” said First Minister Arlene Foster. “We are trying to make sure that people have a good Christmas, and that they can come together in a safe way.”

She told the BBC that £10.5 million already has been provided to support the wet bar sector.

Deputy First Minister Michelle O’Neill said the lifting of the lockdown was endorsed by all of the executive, and the chief medical officer Dr Michael McBride and chief scientific adviser Professor Ian Young.

It comes in a week where the North’s Department of Health’s death toll passed the 1,000 mark. On Thursday, the department reported 11 more Covid deaths taking the total to 1,026.

Current figures show that over the past week the incidence of the virus in Northern Ireland has reached a plateau rather than dropped. The department reported 456 new cases of the virus on Thursday taking the total to 53,728.

Hospital bed occupancy is at 100 per cent. There are 413 patients receiving Covid treatment with 38 in intensive care and 27 on ventilators.

The overall seven-day Covid figure for Northern Ireland has increased from 134 cases on Wednesday to 141 cases per 100,000 of population on Thursday.

Colin Neill, chief executive of Hospitality Ulster, reacted with dismay to the news about pubs which don’t serve food. “It is simply unfair and unjust,” he said.

“This is nothing but terrible news for owners and staff in traditional pubs who have once again been unfairly singled out to bear the brunt of the Covid lockdown for the greater good,” he added.

Mr O’Neill said, “Our traditional pubs have only been open for three weeks since March (two weeks in Derry/Strabane) so they cannot be responsible for the spread of the virus. Despite that, the opportunity for them to trade and try and recoup a small amount of the massive losses they have suffered throughout this year has now been taken away.”