Covid-19: UK getting vaccine first because it is a ‘much better country’

British minister claims country’s scientists are superior to those of France, Belgium or US 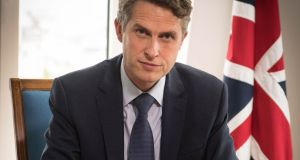 British education secretary Gavin Williamson: ‘We’re a much better country than every single one of them.’ File photograph; Stefan Rousseau/PA Wire

The United Kingdom is getting a coronavirus vaccine first because it is a “much better country” than France, Belgium and the United States, a British cabinet minister has declared.

Gavin Williamson, the education secretary, praised the work done by the medical regulator to approve the Pfizer/BioNTech vaccine for use.

Mr Williamson said the United Kingdom’s status as the first country to approve a vaccine is due to its superior experts.

“That doesn’t surprise me at because we’re a much better country than every single one of them.”

He said the Medicines and Healthcare products Regulatory Agency (MHRA) has “brilliant” experts.

The European regulator has criticised the approval of the vaccine using emergency powers, insisting that its own, slower approach is more appropriate.

Gavin Williamson tells LBC the UK approved a Covid vaccine first because ‘we're a much better country’ than France, Belgium and the US. pic.twitter.com/UZ5WP9eSZF

However, unlike Health Secretary Matt Hancock, Mr Williamson did not suggest that Brexit had directly contributed.

“I think just being able to get on with things, deliver it and the brilliant people in our medical regulator making it happen means that people in this country are going to be the first ones in the western world to get that Pfizer vaccine,” he said.

“Real competitive advantage, but do you know who it’s down to? It’s down to those brilliant, brilliant clinicians in the regulator who’ve made it happen so fast, so our thanks go out to them because by doing what they’ve done, they’re going to have saved lives.”

On Tuesday, Mr Hancock suggested that Brexit had allowed the UK to move quicker on the vaccine — a claim disputed by the MHRA and the EU.

MHRA chief June Raine said it is still bound by EU law until the end of the year and “our progress has been totally dependent on the availability of data in our rolling review and the independent advice we have received”.

The European Medicines Agency (EMA) suggested that it is imposing more stringent checks than the emergency process used by the MHRA.

The EMA believes that its conditional marketing authorisation (CMA) process is “the most appropriate regulatory mechanism for use in the current pandemic emergency”.

A CMA application is supported by “extensive data” submitted by companies and “provides a controlled and robust framework”.

Germany’s ambassador to the UK criticised British ministers’ claims that authorisation of the vaccine developed by a German company was a win for Britain.

“Why is it so difficult to recognise this important step forward as a great international effort and success?” tweeted Andreas Michaelis. “I really don’t think this is a national story. In spite of the German company BioNTech having made a crucial contribution, this is European and transatlantic.”

Dr Berkeley Phillips, medical director of Pfizer UK, compared the process to a book, with the necessary chapters written but not yet fully bound into a complete work.

He told reporters: “In an emergency situation, the MHRA have effectively said ‘We can see what we need to see from those chapters in this book — the book still needs to be written in totality — but, given the crisis that we’re in, we have seen enough to be confident to give this emergency authorisation’.” – Agencies