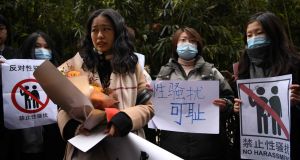 Zhou Xiaoxuan (front) who rose to prominence during China’s #MeToo movement two years ago, stands amongst her supporters as she arrives at the Haidian District Peoples Court in Beijing on Wednesday. Photograph: Noel Celis/AFP

A landmark sexual harassment lawsuit in China has reached an impasse after one of the country’s most prominent television personalities refused to face his accuser in court.

The case is a rare instance in China of a victim of alleged sexual misconduct taking her harasser to court and promises to set the stage for future #MeToo-inspired lawsuits in the country.

In July 2018, Zhou Xiaoxuan, who commonly goes by her nickname “Xianzi,” published an account alleging that Zhu Jun, one of state broadcaster CCTV’s best known hosts, of groping and attempting to kiss her when she was a 21-year-old intern at the outlet.

Mr Zhu denied the account and sued Ms Zhou for defamation, but lost the case in October. On Wednesday, Ms Zhou’s own charges, a civil suit for infringement of her personal dignity, went to court.

His failure to show up, however, led to the closed-door hearing dragging on for more than 10 hours till after midnight without a verdict. It is unclear when the resume trial will resume.

Ms Zhou and her lawyers have insisted that, when the trial eventually proceeds, the defendant be tried in an open hearing in front of a jury. She also told her supporters outside the courthouse that they had asked for new judges to try the case.

“Today actually was [always] unlikely to go smoothly,” she said, according to videos of her remarks. “But being able to obtain an adjournment [means] we will still have another chance to raise our voices.”

In an interview with the Financial Times before the hearing, Ms Zhou said she was demanding Mr Zhu appear in court because she wanted her case to set an example for other sexual harassment lawsuits.

Chinese law until very recently afforded scant protection to victims of harassment and sexual abuse. After a spate of high-profile accusations, protections against “sexual harassment” were written into China’s civil code, which was passed in May and comes into force in January.

“There have been far too few of these kinds of cases. There basically is no understanding of sexual assault within the national judicial organs or law enforcement,” Ms Zhou said.

Regardless of the outcome, the case will have historic significance because “even if this is just an experiment, the process of undertaking this experiment will reveal inadequacies and injustices of current procedures”, she said.

Neither Mr Zhu’s lawyer nor the courthouse responded to requests for comment.

Video of scenes outside the Haidian People’s Court in Beijing on Wednesday afternoon showed dozens of supporters of Ms Zhou holding banners bearing the slogan: “Together we demand answers from history”.

Since 2018, support for feminist causes in China have grown rapidly after tapping into the global #MeToo movement, despite censorship and the occasional detention of leading activists.

Yet, the male-dominated leadership of the ruling Chinese Communist party remains wary of any grassroots movements that seek to challenge its authority.

This suspicion of rapid changes to social norms has complicated the case against Mr Zhu, a household name in China from his previous role as a host of CCTV’s annual Spring Festival Gala, which is watched by hundreds of millions.

In her account, Ms Zhou described how Mr Zhu allegedly groped and tried to kiss her when they were alone in a dressing room in 2014. Later, she took the case to the police, but they advised her not to pursue the complaint. – Copyright The Financial Times Limited 2020