US plans to ban asylum for illegal migrants 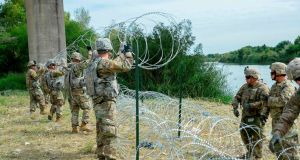 The Trump administration has said it will deny asylum to migrants who enter the country illegally.

It is invoking presidential national security powers to tighten the border as caravans of Central Americans slowly approach the United States.

Officials said the measures are meant to funnel asylum seekers through official border crossings for speedy rulings instead of having them try to circumvent such crossings on the nearly 2,000-mile border.

But the busy ports of entry already have long lines and waits, forcing immigration officials to tell some migrants to come back to make their claims.

The move was spurred in part by caravans of Central American migrants slowly moving north on foot, but will apply to anyone caught crossing illegally, officials said.

It is unknown whether those in the caravan, many fleeing violence in their homeland, plan to cross illegally.

The regulations will be incorporated in a proclamation expected to be issued on Friday by President Donald Trump.

He will invoke the same powers he used to push through a version of the travel ban that was upheld by the Supreme Court, according to senior administration officials.

The regulations would circumvent laws stating that anyone is eligible for asylum no matter how he or she enters the country.

Administration officials said those denied asylum under the proclamation may be eligible for similar forms of protection if they fear returning to their countries, though they would be subject to a tougher threshold.

Those forms of protection include “withholding of removal” — which is similar to asylum, but does not allow for green cards or bringing families — or asylum under the United Nations Convention Against Torture.

The announcement is the latest push to enforce Mr Trump’s hard-line stance on immigration through regulatory changes and presidential orders, bypassing Congress.

But those efforts have been largely thwarted by legal challenges and, in the case of family separations this year, stymied by a global outcry that prompted Mr Trump to scrap them.

The new changes were likely to be met with legal challenges, too.

Omar Jadwat, director of the American Civil Liberties Union’s Immigrants’ Rights Project, said: “US law specifically allows individuals to apply for asylum whether or not they are at a port of entry. It is illegal to circumvent that by agency or presidential decree.”

Curbing immigration has been a signature issue for Mr Trump, who pushed it hard in the days leading up to Tuesday’s midterm elections, railing against the caravans that are still hundreds of miles from the border.

He has made little mention of the issue since the election but has sent troops to the border in response.

As of Thursday, there are more than 5,600 US troops deployed to the border mission, with about 550 actually working on the border in Texas.

The military is expected to have the vast majority of the more than 7,000 troops planned for the mission deployed by Monday, and that number could grow. – PA