Calls for May to publish attorney general’s advice on backstop 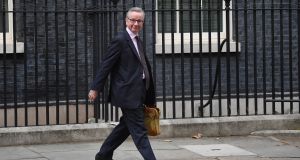 Theresa May’s government is under growing pressure to publish its legal advice on a backstop deal as ministers are expected to meet in the next few days to approve it. Conservative Brexiteers have joined Labour, the DUP and the Liberal Democrats in calling for the advice given to the prime minister by attorney general Geoffrey Cox to be made public.

Labour’s shadow Brexit secretary, Keir Starmer, said it was essential that MPs should be given the opportunity to scrutinise the attorney general’s legal advice before voting on the final Brexit deal.

“The public have the right to know precisely what the cabinet has signed up to and what the implications are for the future,” he said.

The cabinet is expected to meet either this weekend or early next week to sign off on a deal on the Brexit withdrawal agreement, including a new proposal for a review mechanism that would determine when the backstop is no longer necessary. On Wednesday afternoon, ministers were invited into the cabinet office to read the full text of the draft withdrawal agreement, including the protocol on Ireland.

“It’s a great document,” environment secretary Michael Gove told Sky News as he left the building after reading it.

At Tuesday’s cabinet meeting, Mr Cox gave ministers a summary of his legal opinion on rival options for a review mechanism.

He is understood to have warned that seeking a unilateral mechanism, as favoured by Brexit secretary Dominic Raab, heightened the risk of a no-deal Brexit but to have acknowledged that a mutual consent mechanism risked leaving Britain subject to the backstop for longer than it wished.

DUP chief whip Jeffrey Donaldson said his party would like to see the full advice published before parliament’s “meaningful vote” on the Brexit deal.

“It’s in the public interest that we understand fully what is happening here. We’ve had that commitment already from the government, that they will tell us what the legal advice they have is in relation to the backstop,” he told the BBC.

“If the House of Commons is going to have a meaningful vote on a deal upon which this legal advice is very important, then I think people are entitled to know what that legal advice is.”  Former Brexit secretary David Davis called last Sunday for the legal advice to be published and veteran Conservative eurosceptic Bill Cash on Wednesday joined the call for it to be made public.

“The attorney general’s advice on critical constitutional issues is for parliament and the country, not just for the government,” he said.

Governments do not usually publish legal advice, although Tony Blair gave the House of Lords a summary of his legal advice ahead of the invasion of Iraq in 2003. It emerged later that the summary did not accurately reflect the nuanced nature of the attorney general’s advice.