Matthew Whitaker, acting attorney general after Sessions firing, has been a critic of the inquiry 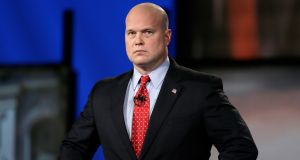 Matt Whitaker: argued that special counsel Robert Mueller was “dangerously close” to crossing a red line by looking at the finances of Donald Trump or his family. Photograph: Charlie Neibergal/AP

As Jeff Sessions left the justice department on Wednesday evening, his replacement as attorney general was there to bid him farewell.

Sessions, a short former Republican senator from Alabama, seemed a diminutive figure as he shook hands with his chief of staff, Matthew Whitaker, who played football in college and has now taken his boss’s job as head of the department of justice, at least temporarily.

Donald Trump’s decision to oust Sessions and appoint Whitaker as acting attorney general just a day after the midterm elections has raised concerns about the future of special counsel Robert Mueller’s investigation into possible links between the president’s 2016 campaign and Russia.

Whereas before, Mueller’s probe was supervised by Rod Rosenstein, the deputy attorney general who is widely viewed as having guarded the former FBI director’s efforts, now responsibility will pass to Whitaker, who has loudly criticised the investigation in tweets and articles, and on television.

“This is a critical hinge on which the future of the Mueller investigation turns,” said Lisa Kern Griffin, a law professor at Duke University. Whitaker, she said, could “limit the resources available to the special counsel, reject proposed indictments against additional defendants, and wind down the investigation”.

Whitaker, a former US attorney in Iowa, will have broad powers to shape Mueller’s work, including the ability to dictate what matters may or may not be investigated, and even to fire him. In addition, Whitaker would decide which portions of Mueller’s final report to make public, if any at all.

He argued Mueller was “dangerously close” to crossing a red line by looking at the finances of Trump or his family, something he said went “beyond the scope of the appointment of the special counsel”. During a CNN television appearance last August, he mused that a replacement to Sessions could starve Mueller’s team of resources as an effective way of hobbling the probe.

On Twitter, where he frequently posts about his workout regime, he linked to an article arguing that any congressional-backed legislation to enshrine Mueller’s position “would be a mistake”. In another tweet, he said a piece titled “Note to Trump’s lawyer: Do not co-operate with Mueller lynch mob” was “Worth a read”.

The acting attorney general also has links to a former co-chair of Trump’s 2016 campaign, Sam Clovis, who has reportedly testified before the grand jury in the Russia probe. Whitaker was campaign chairman for Clovis when he ran, unsuccessfully, for state treasurer in Iowa.

“He’s going to need to consult with the ethics lawyers and make sure there’s no reason he would need to recuse,” said Mary McCord, a former acting head of the DoJ’s national security division.

In a statement on Wednesday, Whitaker said he was “committed to leading a fair department with the highest ethical standards, that upholds the rule of law, and seeks justice for all Americans”.

Whitaker was previously appointed the US attorney for the southern district of Iowa by George W Bush in 2004 and served for a little over five years before returning to private practice when Barack Obama was elected.

His past roles included a stint on the advisory board of a Florida-based invention-promotion company called World Patent Marketing. The firm was shut down in 2017 by the Federal Trade Commission, which accused it of “bilking millions of dollars” from consumers and suppressing complaints by “using threats of criminal prosecution”.

In a 2015 email filed in FTC’s case, he accused a customer who had complained about World Patent Marketing of attempting to extort the business, noted he was a former US attorney, and said the customer could face “serious civil and criminal consequences” for their actions. Whitaker was not charged in the case.

He has long been active in conservative politics both in Iowa, where he served as state chairman for Rick Perry’s presidential bid in the 2012 election, and in Washington DC, where he was executive director of the Foundation for Accountability and Civic Trust, a watchdog group that primarily targeted Democratic politicians and progressive organisations.

William Gustoff, who launched an Iowa-based law firm with Whitaker in 2009, said his former partner was not among the relatively small number of Republicans who have supported Trump from the start.

“If one of the concerns in DC is that he’s in the tank for Trump and has been from the start, that’s not true,” said Gustoff, who called Whitaker “a consummate professional in whatever he undertakes”.

As well as criticising the Russia investigation, Whitaker has also professed admiration for Mueller. In the same August 2017 CNN appearance in which he talked about cutting funds from the special counsel, he said Mueller would likely be unconcerned about personnel changes at the top of the justice department.

“Bob Mueller was the FBI director when I was US attorney. I have a lot of respect for him and I would be surprised, you know, if he ultimately worried at all about this,” he said.

Both Democrats and Republicans have expressed concerns that the appointment of Whitaker could be the first step in an effort by Trump to impede the Russia investigation, a suggestion he has long denied.

Susan Collins, the Republican senator from Maine, said on Wednesday she was concerned Rosenstein would no longer be overseeing the probe and said Mueller “must be allowed to complete his work without interference”. – Copyright The Financial Times Limited 2018