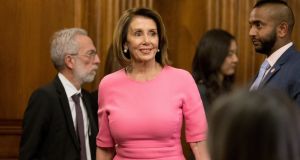 House minority leader Nancy Pelosi has pledged to work constructively with US president Donald Trump as the Democrats prepare to take control of the House of Representatives for the first time in eight years following Tuesday’s midterm elections.

The Republican Party’s disappointment at losing control of the House was tempered by its success in maintaining its majority in the Senate after the Democrats’ hoped-for sweeping win – which was needed for it to win back the upper chamber – failed to materialise.

In addition to winning back control of the House, however, Democrats also enjoyed significant successes in gubernatorial races across the country, winning back the governor’s offices in seven states that had been run by Republicans.

Speaking at a press conference on Capitol Hill – which was delayed substantially as Mr Trump spoke to reporters for 90 minutes on the other side of Pennsylvania Avenue – Ms Pelosi hailed the Democratic performance in the House elections as a “great day for America”.

Highlighting the role that healthcare had played during the election campaign, she said the biggest winners from the midterm elections were American families and American seniors.

She also emphasised the Democrats’ willingness to work with Republicans where necessary, noting that she had worked constructively with George W Bush when she was House speaker in 2007. “We believe that we have a responsibility to seek common ground where we can. Openness and transparency, accountability [and] bipartisanship [are] a very important part of how we will go forward,” she said.

Democrats performed strongly in House seats across the country in Tuesday’s midterm elections. As expected they seized control of the House from Republicans, comfortably winning the 23 seats needed to flip the political hue of the 435-member lower chamber.

However, Democrats failed to win any major battles in the Senate and are likely to see their numbers shrink further in the next Congress, as Democratic hopefuls such as Beto O’Rourke in Texas and Phil Bredesen failed to win traditional Republican seats. Incumbent Democratic senators in states Donald Trump won in 2016, such as Claire McCaskill in Missouri and Heidi Heitkamp in North Dakota, also lost their races.

As a result, Republicans may add to their current Senate majority of 51-49 when the final results are known.

However, with results still coming in on Wednesday night, Democrats had already won 26 seats in the House and were on course to win as many as 35 seats.

The results constituted a decisive victory for the minority party, which won suburban seats from Georgia to Texas to Kansas. The party also saw a wave of new women winning election, at national and state level.

Almost immediately the focus turned to a potential showdown between a Democrat-controlled House of Representatives and the White House, amid expectations that Democrats could use subpoena powers to demand Donald Trump’s tax records or launch impeachment proceedings.

Ahead of the midterms Ms Pelosi had played down expectations among some that Democrats would automatically move to launch impeachment proceedings against Mr Trump amid concern, in part, that it could hurt Democrats in Trump-supporting states in 2020.

Addressing this question at her press conference on Wednesday, Ms Pelosi said the Democrats “do not intend to abandon or relinquish” their investigative and oversight responsibilities, but she added: “This doesn’t mean we’ll go look for a fight, but when we see the need to go forward, we will.”

Ms Pelosi was speaking before Mr Trump announced the resignation of attorney general Jeff Sessions, a development that has refocused attention on the Mueller investigation into Russian interference in the 2016 presidential election. Mr Trump, in a combative press conference in the White House, warned Democrats of “war” if they used their powers to investigate him.

Warning of “investigation fatigue”, he suggested that Republicans could also investigate Democrats, noting leaks that he alleges have come from Democrats. He said his tax returns were currently under audit so he would not release them.

Richard Neal, the Massachusetts Congressman who is widely expected to become chairman of the Committee on Ways and Means, has indicated he is keen to secure Mr Trump’s tax returns, though has said such a move could lead to a legal battle.

Speaking on Wednesday after a strong performance by Republicans in the Senate race, Senate majority leader Mitch McConnell warned Democrats about considering impeachment. “Democrats will have to decide just how much presidential harassment is good strategy. I’m not sure it’ll work for them,” he said. Mr McConnell is expected to stay on in his role when the new Congress meets in January.

Ms Pelosi is also facing questions about her own future. She has said she wants to be the next House speaker – a role she held in 2007, when she became the first ever female Speaker of the House of Representatives. On Wednesday the California congresswoman expressed confidence that she would receive sufficient support from her party colleagues to assume the role.