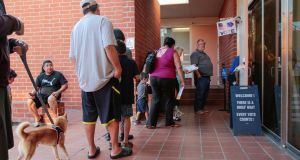 It’s not all about red v blue. In dozens of states, US voters cast ballots on Tuesday on issues ranging from voting rights and climate change to gun control and taxing tech to fund homeless services.

Five states had voting rights issues on their ballots on Tuesday night, including Florida, where voters chose to restore the franchise to 1.5 million people who were convicted of felonies and have completed their sentences. Activists who fought to pass Amendment 4 cheered the victory, which represents the largest expansion of voting rights in decades.

Maryland approved a measure that will expand voting rights by allowing same-day registration, and Nevada enacted automatic voter registration when drivers have contact with the department of motor vehicles.

Meanwhile, North Carolina and Arkansas both passed constitutional amendments requiring voters to provide photo IDs to vote – measures that generally restrict the voting rights of the poor and elderly.

Tech tax for the homeless

A controversial measure that will levy a tax against the largest businesses in San Francisco to fund housing and services for the homeless has passed. The 0.5 per cent gross receipts tax on companies with revenues above $50 million (€44 million) had touched off a battle between the city’s tech billionaires, with Salesforce CEO Marc Benioff publicly feuding with Twitter’s Jack Dorsey and other tech titans who complained the tax was unfair.

Another California housing measure, Proposition 10, which would have allowed cities to enact rent control measures, failed.

A Massachusetts civil rights law came under attack this year with Question 3, which sought to repeal the 2016 state law banning discrimination against transgender people. But voters rejected the measure, making Massachusetts the first state to affirm transgender rights in a statewide vote.

It was a tough night for reproductive rights, with voters in two staunchly Republican states approving measures to restrict abortion. Alabama passed a constitutional amendment to recognise the “right to life” of foetuses and deny public funding for abortion. West Virginia also passed a constitutional amendment declaring that the state does not protect the right to abortion and restricting public funding for the procedure. A similar measure prohibiting public funding of abortion was rejected by voters in Oregon.

Legal weed continues to spread across the US, as four more states voted on legalisation. Missouri voted to legalise medical marijuana, and Michigan voted to approve recreational use of the drug. North Dakota, which allows medical marijuana, rejected legalisation for recreational purposes. We’re still awaiting results from Utah, where a measure legalising use for medical purposes is leading the polls.

Thirty years after Oregon passed a sanctuary law, barring state and local law enforcement from using public resources for immigration enforcement, voters in the state rejected an attempt to repeal the measure.

Voters in Louisiana elected to require a unanimous verdict from a 12-person jury for a felony conviction. Juries in the state had previously been allowed to convict with 10 out of 12 votes, a remnant of Jim Crow-era laws that disproportionately affected African Americans.

It’s not quite $15 an hour, but hundreds of thousands of workers in Arkansas and Missouri will get raises after voters in the two states approved increases to the minimum wages. In Arkansas, the rate will increase from $8.50 to $11 an hour by 2021; in Missouri the wage will ramp up from the current $7.85 to $12 an hour by 2023.

Efforts to curb America’s addiction to fossil fuel consumption saw little success at the ballot box on Tuesday. In Arizona, a well-funded campaign to require electric utilities to get half their power from renewable sources by 2030 was rejected by voters, and in Colorado, a measure to place restrictions on where new oil and gas wells can be located failed to pass.

Missouri and Utah voters also rejected increases on gasoline taxes. Another major environmental initiative – a carbon emissions fee in the state of Washington – is currently trailing. California voters did manage to reject an attempt to repeal the state’s most recent gas tax increase.

In a blow to factory farms, California’s Proposition 12 passed, establishing minimum space requirements for farm animals. The measure also requires that all egg-laying hens be raised “cage-free” by 2022.

Four states voted on the expansion of Medicaid coverage to more low-income residents, a key aspect of the Affordable Care Act, known as Obamacare, that many Republican state governments rejected. So far, voters in Nebraska and Idaho have approved the expansion, and the measure is leading in Utah. In Montana, voters are facing a slightly different question: whether to maintain the Medicaid expansion beyond 2019 and fund it through a tobacco tax. That race is still too close to call.

And in one small victory for women, Nevada voted to exempt feminine hygiene products from state and local sales taxes. – Guardian