The Irish Times view on the US midterms: battle lines redrawn

The Democrats have made an important advance, but the new balance of power is fraught with dangers for the party 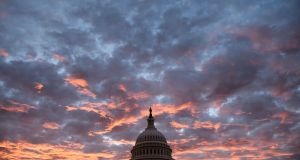 The result of the US midterm elections redraws the battle lines on Capitol Hill for the second half of Donald Trump’s presidency, but it also creates a situation fraught with danger for the Democrats. Photograph: Brendan Smialowski / AFP/Getty Images

Yes, the outcome was broadly in line with pre-election opinion polls. Yes, it’s one of the iron laws of US politics that voters use the midterms to punish a sitting president’s party. And yes, the Republicans have tightened their hold on the Senate. But none of that should obscure the Democratic Party’s achievement in winning a majority in the House of Representatives. In doing so the party has restored a vital check on presidential power while blooding a new generation of candidates and activists and drawing useful lessons about a potential route to victory in the 2020 presidential election.

A strong economy works in an incumbent’s favour. But even an unemployment rate of 4 per cent was not enough to prevent Democrats taking the House for the first time in eight years and securing several important governerships. In the popular vote, Democrats finished with a lead of eight percentage points over Republicans. By historical standards, that’s a blue wave. Were it not for the fact that Republicans spent the past decade redrawing electoral district maps to their advantage, the result would look like a landslide.

There are other reasons for Democrats to be hopeful. While the incoming Republican caucus will be every bit as white and male as the last, the Democrats’ group will include many newly-elected women, two of them Muslim and nearly all of them young. And although the party should be concerned by the failure of its well-funded challengers to make significant headway in the south, such setbacks must be balanced against better news elsewhere, especially in the midwest. The party won Senate seats or governerships in Michigan, Pennsylvania and Wisconsin – three states that turned red two years ago and delivered Trump the White House.

The result redraws the battle lines on Capitol Hill, but it also creates a situation fraught with danger for the Democrats. President Donald Trump, who will relish the partisan battle that awaits, can be expected to blame Democrats for every thwarted domestic policy that falls victim to the new congressional stalemate. The party must avoid playing into his hands. That means choosing a set of policy goals with bipartisan appeal, such as lower healthcare costs, infrastructure spending and new ethics laws, and focusing on them unrelentingly for the next two years. It also means using its powers sparingly. Early, overlyaggressive use of the House majority’s investigative authority and subpeona powers risks appearing like political point-scoring rather than the rigorous oversight that is so urgently required.

A more emphatic victory in the midterms would have produced complacency among Democrats. By suggesting a route back to the White House but at the same time reminding the party of the scale of the battle it faces, Tuesday’s qualified success could be more useful in the long run.