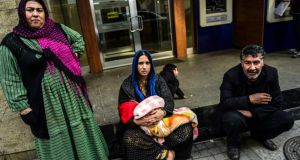 Turkey is home to more displaced Syrians than any other country, but growing intercommunal violence between refugees and their hosts is straining relations.

Sanliurfa, a city of 830,000 people in southeast Turkey, is the latest to be rocked by unrest between Syrians and Turks. On September 27th, two Turkish youths were killed by Syrians following an argument between neighbouring families. In the days that followed, angry mobs of locals attacked Syrians and their businesses, confining many to their homes for much of the past week.

The discord prompted the governor and mayor of Sanliurfa to hold a crisis meeting with the city’s police chief and several NGOs to work out ways to ease tensions. Almost a quarter of the population of Sanliurfa province are Syrians and, Istanbul aside, the region is home to more Syrian refugees than any other province in the country.

The events in Sanliurfa are part of a growing trend. The number of violent incidents involving Turks and Syrians trebled in the second half of last year, according to the International Crisis Group. On numerous occasions in recent years, arguments and disagreements have descended into pitch battles involving dozens of people armed with knives and guns. Entire Syrian communities in Izmir, Ankara, Gaziantep and elsewhere have been forced to leave their homes – often under police escort – by angry crowds.

Over the course of Syria’s seven-year war, Turkey has served as a critical refuge for people fleeing the violence. More than 3.7 million Syrians are registered here – two million more than Europe as a whole – and hundreds of thousands more are thought to live undocumented. The Turkish government has spent about €26 billion on financial and humanitarian assistance, accommodating 210,000 people in purpose-built camps close to the border with Syria, though the majority of refugees have been left to fend for themselves.

Last year, just 20,970 work permits were issued to Syrians, meaning the overwhelming majority are forced to find work in the low-paying informal sector. Turkish employers who would like to hire Syrians must first meet a string of requirements, including paying social security contributions, meaning many are disincentivised from doing so.

In Istanbul, Turkey’s largest city, the official number of Syrians has almost doubled in the past two years to 565,000, though the actual figure may have risen to more than 700,000. A short distance south of the city’s historical centre is the district of Aksaray, where Syrians first congregated and sought to build new lives in late 2011. It was here Ali Alwan made a home and forged a business after leaving Aleppo more than five years ago.

“Work was good when I first arrived here,” he says from behind a large, empty desk at his office on Adnan Menderes boulevard. “Now, it’s zero.” Since the Turkish authorities imposed visa restrictions on Syrians, Iraqis and others entering the country in 2016, he says work for Syrians working in the travel industry has dried up. Though for the most part Syrians and Turks get on fine, such impediments, Alwan says, have led to tensions between Syrians and unskilled Turks also scrambling to find work.

A poll of Turks conducted last spring found that 78 per cent of those interviewed thought their government was spending too much on Syrians, and the question of financial and other benefits provided to refugees roused major debate in the run-up to last June’s parliamentary and presidential elections.

The deal struck by President Recep Tayyip Erdogan and Russian president Vladimir Putin on September 17th to stave off a military campaign by pro-government forces to regain the Syrian province of Idlib avoided, for now, a further wave of refugees into Turkey. Syrians here are well aware that more refugees would make life increasingly difficult for those already established in Turkey.

“Erdogan is our protector, the [Turkish] opposition wants to send us out,” says Alwan. “If something happens in Idlib, it will be worse for us, that’s obvious.”

Many observers see growing pressure on Erdogan, a long-standing defender of Syrians, to enact policies encouraging them to return home. He too has toned down his once-vocal support, stating in February: “We want our refugee brothers and sisters to return to their land, to their homes. We are not in the position to hide 3.5 million here forever.”

It’s a sentiment already borne out in official policy. Last month, the Atlantic Council, a US-based think tank, published a report on Syrians in Turkey, stating how “Ankara refrains from talking about integration, and the official policy is still based on the assumption that Syrians will eventually leave Turkey.”

For many Syrians, what hurts most is being branded with a bad reputation, as undesirable. Syrian beggars and children are highly visible on the streets of all Turkey’s major cities and their misfortunes regularly make local news headlines, though the overwhelming majority of Syrians in Turkey are quietly going about their daily lives.

“The Turks see a person begging on the street and they say all Syrians are like this, that they are a nuisance,” says a barber from Aleppo, who asked not to be identified. “We all get associated with a few Syrians, with the poorest.”