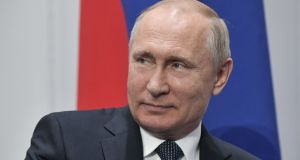 Vladimir Putin has proposed changes to Russia’s constitution that would limit the power of a potential successor if he steps down in 2024, indicating he may occupy a beefed-up role as Russia’s prime minister or in the government’s state council.

The moves were widely seen as preparing the ground for 2024, when Mr Putin, now 67, is obliged to leave the presidency after occupying the Kremlin or the prime minister’s job continuously since 1999.

In a televised speech before senior officials, Mr Putin suggested amending Russia’s constitution to limit a future president to two terms in office – he has served four – tightening residency requirements for presidential candidates, and letting parliament choose candidates for prime minister and the cabinet, in effect weakening the presidency.

Shortly after the speech, prime minister Dmitry Medvedev said that Russia’s government would resign in full, allowing Mr Putin to appoint new ministers as he embarks on a sweeping reshuffle of Russia’s leadership.

Mr Medvedev, who also announced his intention to step down, would be appointed to a new position as the deputy chairman of Russia’s security council, which is headed by Mr Putin.

That would allow Mr Putin to appoint a new prime minister, potentially signalling whom he favours as a potential successor.

Mr Putin nominated Mikhail Mishustin, 53-year-old head of the tax service, as the next prime minister. Mishustin, who will be quizzed by parliament on Thursday, has played ice hockey with Mr Putin but has little public profile and had not been spoken of as a possible candidate.

He will inevitably be viewed as a possible successor to a shrunken presidency, as will members of his cabinet, many of whom are expected to be new to government.

Mr Putin presented his amendments to the constitution as a significant change to Russia’s governing document, and called for the first nationwide referendum since 1993 to confirm them.

An elections official said within an hour of Mr Putin’s speech that a referendum could be prepared as soon as the proposals to amend the constitution were formalised.

Margarita Simonyan, the head of the RT television station, wrote that “effectively, power in Russia is moving to the legislative branch”.

Less credulous observers saw an attempt by Mr Putin to lay the groundwork for a transition of power in 2024, when he should, under the constitution, step down from the presidency after serving two terms back-to-back as Russia’s head of state.

Opposition politician Leonid Volkov said it looked as though Mr Putin was digging in.

“It’s clear to everyone that everything is going exclusively towards setting Putin up to rule for life,” he wrote on social media.

Dmitry Gudkov, another opposition politician, said Mr Putin, re-elected last year for his fourth term, had decided to re-arrange everything around him now rather than wait until closer to 2024.

“Constitutional coups like this occur and are completely legal,” wrote Mr Gudkov.

“The main result of Putin’s speech: what idiots (and/or crooks) are all those who said that Putin would leave in 2024,” wrote Alexei Navalny, a vocal leader of Russia’s opposition.

Mr Putin (67) has, in effect, ruled Russia since 2000, making him the longest-serving leader since Stalin, and the question of what he plans to do in 2024 remains the most important political question in the country.

The question of whom Mr Putin will name as his successor has also been guessed at widely.

Alexey Makarkin of the Center for Political Technologies, a Moscow-based think tank, said Mr Putin’s constitutional amendments were an attempt to plan for his transition in 2024 and to reduce the focus on whom he would select as a successor by making that role less important.

“The president won’t be as dominating a figure [as Mr Putin].” said Mr Makarkin. “So the naming of his successor won’t be such a crucial decision.”

Few expect Mr Putin will want to retire from public life, or that he could do so safely. Instead, he could become prime minister again, as he did in 2008, or follow political models from countries such as Kazakhstan, where the former president Nursultan Nazarbayev stepped down from the presidency last year but remained head of the security council and the ruling party.

“It’s still early to say what role Putin will play,” Mr Makarkin continued. One option, he noted, would be remaining the head of the State Council, the body of top officials he addressed on Wednesday. But Mr Putin’s remarks were a “distinct signal” that he would not remain president after his current term ends, Mr Makarkin said.

Under term limits, Mr Putin left the presidency for four years in 2008 in a tumultuous period during which Russia fought a war in Georgia, faced growing anti-Kremlin protests, and failed to block a Nato intervention in Libya. By 2012, Mr Putin was back, and his temporary replacement, Mr Medvedev, was no longer seen as a viable successor in the long term.

Russia is scheduled to hold parliamentary elections in 2021, and the proposed amendments would make it doubly important for Mr Putin to hold a loyal majority in the State Duma, perhaps forging a formal relationship with United Russia, the country’s ruling party.

Despite enjoying full-throated support from United Russia, Mr Putin has declined to take on a leading role in the party. United Russia has often served as a punching bag for public dissatisfaction, and the party’s rating slumped below 35 per cent after Mr Putin announced pension reforms last year.

Expectations for Wednesday’s speech, which was relayed on a handful of electronic screens around the capital, were high.

The speech focused heavily on the themes of poverty and social support, with Mr Putin promising additional support for families with children, in an effort to raise the country’s birth rate and higher pensions.