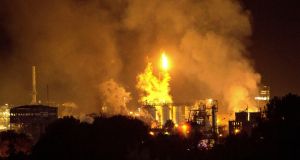 Smoke rises following an explosion at an industrial hub near the port city of Tarragona. Photograph: AP Photo/David Oliete

Firefighters have found the body of a second victim following a massive explosion and fire at a chemical factory in Tarragona in northeastern Spain, they said on Wednesday.

The blast on Tuesday left another eight injured, rescue officials said, and on Wednesday the fire continued to burn at the factory, operated by petrochemicals firm Industrias Químicas del Óxido de Etileno (IQOXE).

It is believed a 20-tonne tank full of ethylene oxide exploded.

While the blaze has been brought under control, local authorities said on Twitter they had yet to identify the second victim: “There is structural risk in the area and work is being done to stabilise the area and safely reach the victim.”

Prime minister Pedro Sanchez’s office said he was in touch with Catalan authorities and that Madrid was ready to “provide the necessary support due to this serious event, which has caused several injuries and substantial material damage”.

IQOXE is a producer of ethylene oxide, a highly flammable gas used to make, among other things, ethylene glycol used in computers and vehicles.

A spokesman for IQOXE, owned by Spain’s CL Grupo Industrial SA, said the company had opened an internal investigation into the explosion.

“We deeply regret the loss of one of our co-workers and the suffering of those who are injured,” the spokesman, José Luis Morlanes, told reporters.

The factory began operations in June 2017 and had been operating normally, he added, prior to Tuesday’s explosion.

The civil defence agency, which initially advised people nearby to stay indoors as a precaution, said air quality tests carried out Wednesday had not shown any risk. – Reuters