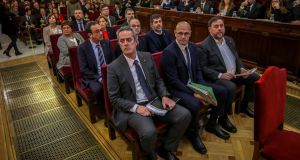 Nine of the 12 people on trial are former members of the Catalan cabinet. Photograph: Emilio Naranjo Pool/Getty Images

The highly anticipated trial of 12 Catalan leaders for their role in the failed independence drive of 2017 began on Tuesday in Spain’s supreme court, with members of the defence alleging that Madrid was overseeing an attack on democratic rights.

“We have the right to live in democracy,” said Andreu Van den Eynde, lawyer for former Catalan vice-president Oriol Junqueras, who faces a potential 25-year jail sentence for rebellion, sedition and misuse of public funds.

He added: “This trial violates [the concept of] political dissidence and the right to protest.”

The Catalan independence movement has frequently challenged the credibility of the trial, arguing that the judiciary is politicised and lacks legitimacy, claims the Spanish authorities roundly reject.

The divisive nature of the trial was reflected by a series of demonstrations that took place in streets near the court in central Madrid. At one, Spanish unionists gathered, chanting the word “terrorists” as they brandished caricatured pictures of the defendants.

A heavy police presence near the court kept those protesters away from a group of pro-independence Catalans and Spanish republicans who demonstrated against the trial, describing the defendants as “political prisoners”. In the evening, a large demonstration against the trial took place in Barcelona.

Inside the court it was a day of preliminary procedure as the defendants were read the charges they face and their lawyers made opening remarks, ahead of the cross examinations due to start later in the week.

Not all the defence teams took a critical approach to the proceedings. Xavier Melero, lawyer for the former Catalan interior minister Joaquim Forn, chose a more conciliatory tone, describing the process as “a penal trial, no more and no less, like an embezzlement or a failed breathalyser test”.

However, former Catalan president Carles Puigdemont, who avoided the reach of the Spanish judiciary by leaving the country in 2017, appealed for Europe to scrutinise proceedings. Speaking in English from Berlin, Puigdemont asked “why the European Union is more concerned by that [which] is going on for example in Venezuela than what is happening in Madrid today”.

As the trial began, there was also drama in parliament, where the Socialist government of Pedro Sánchez is making a last-ditch effort to gather support for his 2019 budget bill. He needs the votes of the two main Catalan pro-independence parties and the supreme court trial has made that difficult.

On Wednesday, a parliamentary vote will give a clear idea of whether the government has the backing it needs. If it does not, as is widely expected, Mr Sánchez is likely to call a snap election for the coming months.

The leader of the conservative Popular Party (PP), Pablo Casado, has frequently accused Mr Sánchez of seeking to appease Catalan secessionists. On Tuesday he claimed the prime minister was leading “a zombie government”, adding that “it is dead and it still doesn’t know it and it tries to negotiate the 2019 budget with those who use it so it will stay in power to profit their separatist process”.

In a parliamentary debate on the budget, finance minister María Jesús Montero appeared to anticipate the defeat of the government’s budgetary bill.