Trump ‘not happy’ with spending deal but plays down shutdown fears

Senior Republicans urge president to back deal that includes $1.3 billion for border wall 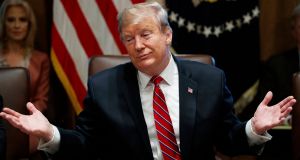 US president Donald Trump has said he is “not happy” with a compromise spending agreement struck by congressional negotiators on Monday but indicated that he may still endorse it to avoid a government shutdown on Friday.

Democrats and Republicans reached agreement “in principle” on Monday evening on a spending deal that would ensure the government will remain funded after Friday when the current set of temporary funding Bills expire.

The deal includes $1.375 billion for a physical border with Mexico – far less than the $5.7 billion demanded by Mr Trump for his proposed wall. The agreement also envisages a reduction in the number of migrants that can be detained by immigration and customs enforcement officers, a key demand of Democrats and an issue that had led to the breakdown of talks over the weekend.

But any Bill must be signed off by the US president.

Mr Trump gave his first detailed response to the proposal at the White House on Tuesday. “Am I happy at first glance? The answer is no, I’m not, I’m not happy,” he said in response to questions from reporters. “It’s not going to do the trick, but I’m adding things to it and when you add whatever I have to add, it’s all going to happen where we’re going to build a beautiful, big, strong wall.”

The prospect that Mr Trump would sign the Bill and then introduce separate measures to tap alternative sources of funding for the wall emerged as a distinct possibility. Officials have noted that the president is reluctant to shut down the government, three weeks after the longest government shutdown in US history ended.

“I don’t think you’re going to see a shutdown. I wouldn’t want to see a shutdown. If you did have it, it’s the Democrats’ fault,” Mr Trump told reporters. He was due to speak further with congressional Republicans on Tuesday, who are encouraging him to sign up to the agreement.

“I hope he signs the Bill,” Senate majority leader Mitch McConnell said, but he said the president should also feel free to use any political tools he needed to build the wall.

Various executive actions up to and including declaring a national emergency are under consideration by the White House.

The breakthrough in negotiations in Washington on Monday night took place as Mr Trump held a rally in El Paso Texas. Flanked by enormous red banners with the phrase “Finish the Wall,” Mr Trump told the crowd: “Today, we started the big, beautiful wall right on the Rio Grande”, a reference to the river that separates the US from Mexico in Texas.

In a free-flowing speech he claimed that 60,000 people had applied to attend the rally, but only 10,000 had been permitted to enter. “Is there anywhere more fun than a Trump rally?” he said to cheers.

But it later emerged that a BBC cameraman had been attacked by a Trump supporter who had entered the press area during the rally.

The BBC said cameraman Ron Skeans was “violently pushed and shoved by a member of the crowd” while covering the event. In a statement, the White House Correspondents’ Association said it “condemns the physical attack on our colleague at the president’s rally in El Paso, Texas. We are relieved that, this time, no one was seriously hurt. The president of the United States should make absolutely clear to his supporters that violence against reporters is unacceptable.”

During the rally, Mr Trump also mocked Beto O’Rourke, the former Congressman who is widely believed to be considering a run for president in 2020.

The former congressman held his own rally less than a mile away from the El Paso County Coliseum where Mr. Trump was speaking. “We stand for America and we stand against walls,” the El Paso native said as he addressed a crowd of about 10,000 people.