US government shutdown set to continue into new year 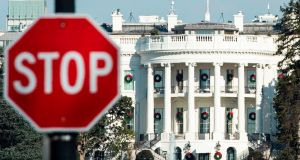 A stop sign is seen near the White House during a government shutdown in Washington, DC. Photograph: Andrew Caballero-Reynolds/AFP/Getty Images

A partial US government shutdown appears likely to drag into the new year, as Congress made no progress towards ending the impasse and President Donald Trump kept up a barrage of tweets demanding funding for a border wall.

Seven days into the shutdown, Mr Trump threatened to close the border with Mexico entirely and shut off aid to Central America if he did not get the money for a wall that would deter migrants from crossing illegally in to the US.

The rhetorical escalation came after the House of Representatives and the Senate convened for mere minutes on Thursday. Neither the president nor congressional Democrats seemed willing to budge from entrenched positions over how much money should be allocated to border security and what kind of security it should be spent on.

“Either we build (finish) the Wall or we close the Border,” Mr Trump wrote on Twitter on Friday. “Honduras, Guatemala and El Salvador are doing nothing for the United States but taking our money. Word is that a new Caravan is forming in Honduras and they are doing nothing about it. We will be cutting off all aid to these 3 countries - taking advantage of U.S. for years!”

The failure to pass a full suite of spending Bills has affected nine government agencies, including the homeland security, state and justice departments.

About 420,000 essential employees have been working without pay, while a further 380,000 federal workers have been put on unpaid leave. The uncertainty has added turbulence to US stock markets.

In the Senate on Thursday, a single Republican senator gavelled in the empty chamber, before ending the session just moments later. In the House, a lone Democratic member, James McGovern, attempted to bring a short-term government funding Bill to the all-but-empty floor, but was shut down by his only two colleagues in the room – both Republicans – who drowned out his shouting with their gavels and ended the session minutes later.

Mr Trump walked away from a proposed deal just before Christmas that would have kept the government open into the new year at previous funding levels – a compromise measure that had already passed the Senate unanimously.

Since then Mr Trump has maintained he would not sign any Bill that did not include funding for his border wall. However, Democrats believe their hand will strengthen the longer the shutdown continues. The party is set to take control of the House on January 3rd.

Mr Trump returned to Washington following a surprise trip to Iraq, his first visit to US troops in combat since taking office almost two years ago. In two days of tweets since his return, the president has accused his Democratic opponents of “obstruction” and “stupidity”, and claimed that they were in favour of an “open southern border”.

He alleged that Democrats who had previously been in favour of the wall were now opposing it for political reasons. He also falsely claimed that it had been Democrats, not him, who had walked away from a bipartisan plan last year that would have included additional border security funding in exchange for a deal to protect Dreamers, the young undocumented immigrants who were granted amnesty under President Barack Obama.

The White House released a statement accusing Democrats of failing to take any action to end the shutdown and reach a compromise. “The president and his team stayed in Washington over Christmas hoping to negotiate a deal that would stop the dangerous crisis on the border, protect American communities, and reopen the government,” it said.

“The president does not want the government to remain shut down, but he will not sign a proposal that does not first prioritise our country’s safety and security.”

When Democrats take control of the House in the new year, they are likely to put forward the same temporary spending Bill that the Senate passed earlier this month, putting more pressure on Mr Trump to sign a measure that will then have passed both chambers of Congress.

On Thursday Mr Trump claimed on Twitter that most of the federal workers to be affected by the shutdown were Democrats, prompting a sharp response from Mark Warner, the Democratic senator from Virginia and the ranking member of the Senate intelligence committee.

“Federal employees don’t go to work wearing red or blue jerseys,” the senator wrote on Twitter. “They’re public servants. And the president is treating them like poker chips at one of his failed casinos.” – Copyright The Financial Times Limited 2018