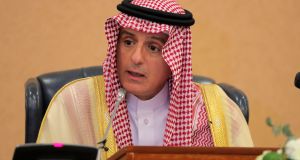 Saudi Arabia’s King Salman has issued an overhaul of top government posts in the wake of international fallout from the killing of Saudi writer Jamal Khashoggi nearly three months ago.

He also ordered a shake-up of the kingdom’s supreme council, which oversees matters related to security.

The council is headed by the king’s son, Crown Prince Mohammed bin Salman, whose powers including roles as deputy prime minister and defence minister were untouched in the overhaul.

Adel al-Jubeir, who has been Saudi foreign minister since 2015, has been replaced by Ibrahim al-Assaf, a former finance minister.

Mr al-Jubeir was appointed to the post of minister of state for foreign affairs.

Mr al-Assaf had been serving as minister of state, and has held a seat on the boards of oil giant Saudi Aramaco as well as the kingdom’s sovereign wealth fund, the Public Investment Fund.

The changes, which affect several key ministries, come as the king and Prince Mohammed are looking to announce a major reshuffle following Mr Khashoggi’s killing by Saudi agents in Istanbul.

The changes appear to further consolidate the crown prince’s grip on power by appointing to key posts advisers and members of the royal family seen as close to him.

It may also signal further efforts to show that changes are being made after the US senate passed a resolution saying it believes the crown prince is to blame for Mr Khashoggi’s grisly murder.

Mr al-Assaf is well known to international investors, having led several Saudi delegations to the World Economic Forum in Davos. He served as finance minister under King Fahd and King Abdullah.

He had been serving as a minister of state last year when he was reportedly detained at the Ritz-Carlton hotel in Riyadh along with dozens of high-ranking officials and princes in an anti-corruption sweep led by the crown prince.

Shortly afterwards, Mr al-Assaf appeared back at a Cabinet meeting, to the surprise of many.

The changes include new aides to the crown prince, including Musaed al-Aiban as national security adviser and former media minister Awwad al-Awwad as adviser to the royal court.

Khalid al-Harbi was named as head of general security.

Turki al-Sheikh, a confidant of the crown prince, was removed as head of the Sports Authority and replaced by Prince Abdulaziz bin Turki al-Faisal.

This means Mr al-Sheikh no longer oversees a cybersecurity and programming body that was led by Saud al-Qahtani, a close aide to the crown prince who was sacked from his post and sanctioned by the US Treasury Department for helping to mastermind the plot that led to Mr Khashoggi’s killing.

Mr Khashoggi wrote critically of the crown prince in columns for The Washington Post before he was killed. After denying any knowledge of Mr Khashoggi’s death for weeks, Saudi authorities eventually settled on the explanation that he was killed in an operation masterminded by former advisers to Prince Mohammed.

Mr al-Sheikh will now lead the General Entertainment Authority, a body created in recent years to help organise and promote concerts and other events that had long been banned in the conservative country.

Hamad al-Sheikh, a royal court adviser and former college dean who studied in the US, was appointed minister of education.

The king’s eldest son, Prince Sultan bin Salman, was removed as head of the tourism authority. He will lead a new national space agency.

In 1985, he became the first Arab and Muslim astronaut to fly in space.

Prince Abdullah bin Bandar — the son of Prince Bandar Al Saud, who once served as Saudi ambassador to Washington — was named head of the National Guard.

The force is tasked primarily with the protection of the Al Saud ruling family. Prince Abdullah had been deputy governor of Mecca. – AP