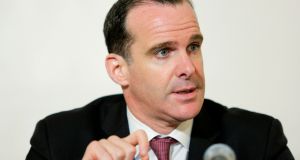 Image from September 2017 of the US envoy to the coalition against Islamic State, Brett McGurk. File photograph: Eduardo Munoz/Reuters

The US envoy to the coalition fighting Islamic State has resigned over president Donald Trump’s decision to withdraw American troops from Syria.

Mr McGurk has been the special presidential envoy for the global coalition to defeat Islamic State, also known as Isis, since 2015. He was one of the few Obama appointees to stay on under Mr Trump.

CBS News first reported McGurk’s move. Citing anonymous sources, it said he had planned to leave his post in February but had brought the date forward due to a “strong disagreement” with the president’s decision to withdraw the troops. He will now quit at the end of this month.

Mr Mattis resigned on Thursday, issuing a letter of resignation that was implicitly critical of Mr Trump and reportedly angered the president. It was reported on Friday that the defence secretary quit after Mr Trump made the decision to withdraw from Syria during a conversation with the Turkish president, Recep Tayyip Erdogan.

CBS said Mr McGurk was in the Middle East for talks with US Kurdish allies when Mr Trump announced his decision. The Kurds fear attack by Turkey if US troops stationed in Syria are withdrawn.

Remain on the ground

On December 11th, Mr McGurk told reporters that he thought it was “fair to say Americans will remain on the ground after the physical defeat of the caliphate, until we have the pieces in place to ensure that that defeat is enduring”.

He said then it would be “reckless” to consider Isis as having been defeated, a claim repeatedly made by Mr Trump.

On Saturday, Mr Trump defended his decision on Twitter, writing that US troops had meant to be in Syria “for three months, and that was seven years ago – we never left”.

He continued: “When I became president, Isis was going wild. Now Isis is largely defeated and other local countries, including Turkey, should be able to easily take care of whatever remains. We’re coming home!” – Guardian