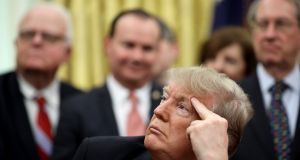 Donald Trump at an event in the Oval Office of the White House on Friday. Photograph: Win McNamee/Getty

US President Donald Trump has discussed firing Federal Reserve Chairman Jerome Powell as his frustration with the central bank chief intensified following this week’s US interest-rate increase and months of stock-market losses, according to four people familiar with the matter.

Advisers close to Mr Trump are not convinced he would move against Mr Powell and are hoping that the president’s latest bout of anger will dissipate over the Christmas period, the people said on condition of anonymity. Some of Mr Trump’s advisers have warned him that firing Mr Powell would be a disastrous move.

Yet the president has talked privately about firing Mr Powell many times in the past few days, said two of the people.

Any attempt by Mr Trump to push out Mr Powell would have potentially devastating ripple effects across financial markets, undermining investors’ confidence in the central bank’s ability to shepherd the economy without political interference. It would come as markets have plummeted in recent weeks, with the major stock indexes already down sharply for the year.

Mr Trump’s public and private complaints about members of his administration have often been a first step toward their departures - including former Attorney General Jeff Sessions, his first Secretary of State Rex Tillerson and outgoing chief of staff John Kelly.

It’s unclear how much legal authority the president has to fire Mr Powell. The Federal Reserve Act says governors may be “removed for cause by the President.” Since the chairman is also a governor, that presumably extends to him or her, but the rules around firing the leader are legally ambiguous, as Peter Conti-Brown of the University of Pennsylvania notes in his book on Fed independence.

Such a move would represent an unprecedented challenge to the Fed’s independence. Though he was nominated by the president, Powell was thought be insulated from Trump’s dissatisfaction by a tradition of respect for the independence of the central bank.

That separation of politics from monetary policy is supposed to instill confidence that Fed officials will do what’s right for the economy over the long term rather than bend to the short-term whims of a politician.

Trump’s frustration with Mr Powell has greatly intensified in recent days, said two of the people. Though Mr Trump’s aim is to stop interest rate increases that slow economic growth, such a move could backfire by roiling already turbulent financial markets.

Even routine changes at the top of central banks create uncertainty in markets as investors try to assess how tough a new leader may be in preventing the economy from overheating and accelerating inflation. Another problem with dismissing a sitting Fed chief may be finding a replacement who wants assurance that he or she won’t succumb to the same fate as Mr Powell.

Mr Trump is in the midst of a rolling shake-up of his administration. Since the November midterm elections, he’s announced the exits of Mr Sessions, Mr Kelly, Interior Secretary Ryan Zinke and Defence Secretary James Mattis. At the same, the threat of a government shutdown has added to the sense among investors of disarray in Washington. - Bloomberg