US election: Big welcome for Donald jnr as his campaign blitz lands in Ohio 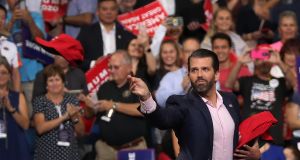 Donald Trump jnr tosses campaign hats to the crowd before his father arrives on stage to announce his candidacy for a second presidential term in June 2019 in Orlando, Florida. Photograph: Joe Raedle/Getty

It started with an invocation. Shortly before the arrival of Donald Trump jnr to the small trucking depot on the outskirts of Toledo, Ohio, the young local pastor called the people to prayer.

“Oh God, we praise you for the prosperity that you have given this country, we recognise every blessing that we enjoy...I thank you that you have allowed us to have a president who stands for the rights of people, including the rights of the life of the unborn.”

With that the event began. The president’s eldest son and namesake bounded onto the stage, framed by a giant Make America Great Again poster. It was one of four stops that Donald Trump jnr made on a single day this week as he hits the road to help his father’s re-election efforts.

The president’s family members have emerged as crucial figures in the Trump re-election campaign.

The adult Trump children have been dispatched across the country in a bid to motivate supporters. Ivanka has been appearing at carefully selected locations in an effort to maximise exposure to the all-important suburban women vote. Eric and Tiffany have been in various swing states across the country.

Mr Trump’s youngest daughter hosted a Breakfast with Tiffany event in North Carolina on Tuesday, while Eric was in Reno and Las Vegas as the Trump campaign makes a play for Nevada.

But it is Donald Trump jnr who is playing the leading role in the Trump re-election campaign, holding more events than any other member of the family. Though he does not occupy an official role in the West Wing like his sister and brother-in-law Jared Kushner, the younger Donald has been centrally involved in his father’s grassroots efforts ever since his election.

Donald jnr, who, along with brother Eric, charmed locals in Doonbeg, Co Clare last year by buying drinks during his father’s visit to his golf course, has embraced the world of politics since his father entered the political fray. The father of three, who is dating former Fox News star Kimberly Guilfoyle, is a vigorous defender of his father on Twitter and earlier this year published a book titled: Triggered: How the Left Thrives on Hate and Wants to Silence Us.

A strong defender of the second amendment’s right to bear arms, he has become a familiar face, not just at his father’s political events, but at campaign stops for other Republican politicians. His frequent presence at events and on channels like Fox News has prompted speculation that he could be considering his own run for office.

Most recently, he has been linked with a run for the mayor of New York when Bill DeBlasio’s term ends, but when asked about it last week on Fox News his father said he’d never win as a Republican.

Here in Ohio, however, his popularity is unquestioned. Hundreds of people have gathered at Nagle’s Trucking company in Walbridge, a small town on the outskirts of Toledo, to hear the 42-year-old speak.

This northwestern corner of Ohio typifies the industrial rust belt that Donald Trump was able to woo to such effect in 2016.

Trump-Pence signs are everywhere. Walbridge is part of Wood County, which encompasses more liberal-leaning areas near the city as well as rural communities like Walbridge. Trump won 51 per cent of the vote compared with Hillary Clinton’s 42 per cent in the county. But for years Wood County leaned Democrat, re-electing Democratic senator Sherrod Brown in 2018 for example.

I am the son of a billionaire from Manhattan, but I’ve had more blue collar jobs than Joe Biden

The Trump campaign’s decision to invest time and money in Ohio is evidence to some that Republicans are on the defensive in a state that many believed had turned reliably Republican in recent years. No Republican candidate has ever won the White House without Ohio, and polls are showing Joe Biden gaining ground. The Real Clear Politics average of polls puts Trump just marginally ahead by 0.6 per cent.

The locals who have gathered to hear Donald Trump jnr, however, are true believers. Though seemingly everyone in the room is white, it is diverse in terms of age and gender, with some families and many younger women in the audience.

As he begins his stump speech, Trump jnr hits on familiar themes, with Hunter Biden and the “fake news” media his primary targets. “Joe Biden is likely the most corrupted person to ever even think about running for the presidency...and in about a week he could win it,” he declares to nods of approval from the crowd.

He denounces Biden’s campaign schedule. “The presidency is not a one-hour, every four- or five-day gig,” he says. “This guy could be the leader of the free world, though it’s not free, because they have to pay for Hunter Biden” – one of the many lame jokes he throws out to the crowd.

But while his style is sometimes stilted, Trump jnr knows his audience.

Referring to the Democratic nominee’s almost half a century in politics, he quips: “If you had someone working on one of the trucks here for 47 years, would you give that guy a promotion? No, they’d get fired.”

Similarly, he recounts to the mostly blue collar workers stories of how he toured building sites with his father when a teenager. “I am the son of a billionaire from Manhattan, but I’ve had more blue collar jobs than Joe Biden...unlike the Bidens we had jobs, we were business people.”

He also subtly addresses the fact that this is a community that for many years voted Democrat.

As he wraps up his address, and the signature rock music begins, his entourage heads to the exit, ready to whisk him off to his fourth event of the day, in nearby Michigan.

Here in Walbridge he has clearly made an impression. Though Democrats argue that the Trump campaign’s strategy is to appeal to a narrow base of supporters who have already committed to the president rather than try to expand his base, significantly, at least some people in the crowd have not voted before.

Britney Zacharias and her husband Eric, who is a military veteran, have come to the event to voice their support for the president.

“We support what Trump’s mission is...everything he stands for, everything he’s done has been positive for our life,” says Britney, noting that the president has been particularly supportive of military families.

She says that this year is the first time they are voting in an election.

“We voted for the first time today. We knew it’s going to be a tough race and we wanted to make sure that...with someone we support as much as we support Trump our voices are heard to make sure every vote counts.”

With just a week left until election day, the Trump campaign will be hoping that first-time voters such as these will help drive up their numbers in the most fiercely contested states in the country.