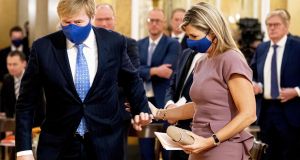 In their second pandemic-related gaffe in two months, the Dutch royals have been forced to return from holiday in Greece – and the prime minister has had to take the blame for their behaviour – after the government advised families against unnecessary travel during the half-term break.

In a bizarre series of events, the royal family flew to their holiday compound in the Peloponnese last Friday and returned to the Netherlands on Saturday, less than 24 hours later, after an outcry on social media was taken up by traditional news outlets and opposition politicians.

Although King Willem-Alexander, Queen Maxima, and their three teenage daughters – princesses Amalia, Alexia, and Ariane – flew to Greece in the privacy of a government jet, their return journey was in the full public glare of a scheduled KLM flight to Schiphol airport.

The royals flew to Greece despite the government’s announcement last Tuesday of a new “limited lockdown” nationwide for the next four weeks at least – with more than 10,000 dead since March, and a second wave of the virus sweeping the country at a rate of more than 8,000 new cases a day.

In a brief statement, the royals said: “We have seen the reaction and messages in the media and we are going to end our holiday.

“We don’t want there to be any doubt: it is crucial to follow the guidelines in order to bring Covid-19 under control – and discussion about our holiday is not contributing to that.”

This is the second time since August that the royals have apparently unknowingly contravened Covid-19 regulations to which most of the rest of the country adheres.

At the end of August, again in Greece, the king and queen were photographed shoulder to shoulder with a local restaurateur – and with none of the party wearing masks.

On this occasion, however, the fallout was more serious, because prime minister Mark Rutte has “ministerial responsibility” for liaison between the government and the royal household – and he was forced on Sunday to suggest that responsibility for the latest gaffe had been his.

With 8,141 new cases in the 24 hours to Saturday morning, and 1,568 patients in hospital, 352 of them in intensive care, the public health institute’s chief virologist, Jaap van Dissel, warned the limited lockdown might have to continue until December.