Giuseppe Conte won plaudits for calm handling of first wave, but the mood has changed 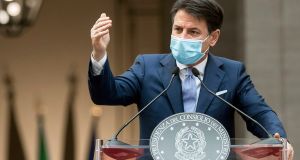 Italian premier Giuseppe Conte: attacked for his statement over the weekend that the measures would allow Italians to have a “serene” Christmas. Photograph: Roberto Monaldo/LaPresse via AP

A year ago Italian prime minister Giuseppe Conte was facing multiple domestic crises and in charge of an unstable government made up of two parties that had spent the previous five years as sworn and bickering enemies. Few in Rome believed he would last much longer than six months.

Twelve months on, and in the midst of a pandemic, to the surprise of many Conte is still leading that rickety coalition between the Five Star Movement and the Democratic party. But having won plaudits for his calm handling of the largest economic and health crises in Italy’s postwar history, he now faces the biggest challenge of his premiership yet.

Conte, a quietly spoken law professor once derided as little more than a caretaker leader, is on course to become one of Italy’s top 10 longest-serving prime ministers since the end of the second World War. In six months he will have been in office longer than his predecessor but one, Matteo Renzi, an outcome most Italian pundits would have believed impossible last year.

“From the start of the [coronavirus] crisis, Conte’s communication strategy was to be very stark and honest with the country, and by doing this he embodied the authority that people wanted at the time,” said Valentina Gentile, assistant professor of political philosophy at Luiss University in Rome.

On Sunday, buffeted by a new outbreak in coronavirus cases that Italy previously appeared to have had held back, and with public unrest breaking out on the streets, the prime minister delivered the type of frank television address that had endeared him to the Italian people during the first phase of the crisis.

But this time the reaction to new restrictions that included closing restaurants and bars at 6pm for a month was less sympathetic. Italy’s right-wing opposition seized on the new measures that heralded a return to a partial national lockdown as evidence that Conte’s much-lauded response to the first wave had in fact not worked.

As news emerged that Conte’s trusted spokesman and spin-doctor Rocco Casalino had tested positive for coronavirus, Matteo Salvini, leader of the anti-migration League party, took to Italy’s airwaves to condemn the measures, arguing they would further wreck an already battered economy.

Salvini threatened to launch legal action to reverse Mr Conte’s decree, and said the closing of restaurants that had invested heavily in complying with regulations aimed at halting the spread of coronavirus was a betrayal. “Why take it out on them?” he asked. Salvini posted social media footage of struggling restaurant owners explaining their plight.

Giorgia Meloni, leader of the opposition Brothers of Italy party, said Conte’s government should immediately pay money to businesses that would be damaged by the new measures. “Conte has the duty to apologise and compensate them,” she said. “It is not right to criminalise an entire sector after the state has given them certain prescriptions so that they can reopen safely.”

Daniele Albertazzi, a reader in politics at the University of Birmingham, said Conte had benefited from being perceived as an outsider to the Italian political system in a country where suspicion of career politicians is deeply entrenched.

“Like many other leaders in Europe, Conte has enjoyed [an] increase in popularity, but he has also played it well. He has grown and he has surprised people,” Albertazzi said. “But this time is different to February or March. The economy is going to be hit very badly, and people are getting very tired of restrictions.”

The starkest demonstration of that fatigue came over the weekend when isolated rioting broke out in Naples, the largest city in Italy’s south, in reaction to the prospect of new restrictions being imposed. On Saturday evening a group of protesters, some linked to fringe far-right groups, threw objects at police in Rome.

On Monday evening protests against Conte’s new measures broke out across Italy; footage from Milan showed a small group throwing a Molotov cocktail at a police car. In the southern city of Lecce, a group of protesters rushed at a police barricade chanting “freedom, freedom”.

Conte was also attacked for his statement over the weekend that the measures would allow Italians to have a “serene” Christmas. The right-wing politician and journalist Renato Farina wrote that the prime minister had threatened Italians with “coal at Christmas if we are going to be bad citizens and disobey”, and “had transformed citizens into children”.

Gentile argues that Conte nevertheless remains in a strong position politically, despite growing disquiet in Italy over the new rise in Covid-19 cases, because neither of the two parties in the governing coalition wants elections any time soon given the lead that the right-wing opposition holds in opinion polls.

Yet in a country where political fortunes are notoriously volatile, the reputation Conte won during the first Covid-19 outbreak will quickly become tarnished should he be seen to be losing control of the situation. “How he handles the situation from here will be critical,” saMs Gentile.

Albertazzi cautions that history shows that even “outsider” politicians whom Italians enthusiastically embrace as embodying a break with the status quo can be ejected from the national scene just as quickly.

“We saw this with [the economist and former prime minister] Mario Monti, ” he said. “People who come in from outside of politics are always quite attractive at the start, as Italians loathe the political classes. But then people quickly get sick of them as well.” – Copyright The Financial Times Limited 2020