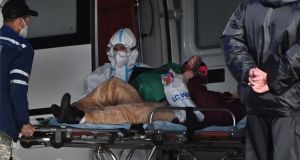 A coronavirus patient arrives for treatment at a hospital in Kommunarka outside Moscow. Photograph: Alexander Nemenov/AFP/Getty

Moscow has rejected a recommendation from Russian health authorities to impose a curfew on bars, restaurants and nightclubs, in a bid to protect the capital’s economy even as the nation reported a record daily rise in coronavirus deaths.

Russian officials confirmed 320 fatalities from Covid-19 and 16,550 new infections on Tuesday. The country has now recorded 1.55 million cases of coronavirus, the fourth-highest total in the world, and a death toll of 26,589.

Russia’s national health watchdog announced that from Wednesday it will be compulsory to wear a mask on public transport and in other crowded places everywhere in the country, and recommended that all eateries, bars and entertainment venues should close from 11pm until 6am.

As with many other measures introduced in Russia to fight coronavirus, however, local authorities will decide whether to implement the curfew.

Gulnara Penkova, a spokeswoman for Moscow city hall, said the capital’s earlier introduction of electronic registration for visitors to late-night venues would suffice for now.

“This measure allows for effective control and tracing if visitors become infected. The city is seeing a significant decrease in the growth rate of Covid incidence,” she added. “Because of this, at the moment we consider it possible to refrain from shutting down any sectors of the economy.”

Moscow, a city of some 13 million people, has been the epicentre of Russia’s coronavirus outbreak, but reports from a number of provincial towns and cities suggest that some poorer areas are now struggling to cope with the pandemic.

“Indeed, the background picture is quite serious,” Kremlin spokesman Dmitry Peskov said this week. “Now the main force of the epidemiological blow has fallen on the regions, it has moved east of Moscow.”

Russian officials reported a record national daily rise of 17,347 new Covid-19 infections on Monday, when it was revealed that 91 of the country’s 450 parliamentary deputies have had or are now infected with coronavirus, including 38 who are currently in hospital and one who died.

Healthcare systems across central and eastern Europe are now under strain from the virus: Poland and Bulgaria reported record rises in cases on Tuesday, while Hungary and Romania saw their highest one-day death tolls from Covid-19.

The Czech Republic, which has Europe’s highest infection rate, confirmed 10,273 new cases. On Wednesday it will introduce a nationwide curfew from 9pm to 5am, when only essential journeys and travel to work will be allowed, and almost all shops will be expected to close at 8pm and not to open on Sundays.

Neighbouring Slovakia plans to use its army this weekend to conduct mass national testing for coronavirus.

“It is a solution with which, when we do it together, we have the chance to avoid a complete lockdown and save hundreds of lives,” said Slovak premier Igor Matovic.