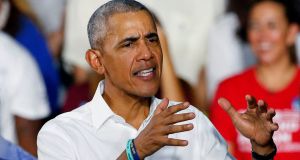 Barack Obama: told graduating students in an online speech that leaders in Washington “aren’t even pretending to be in charge”, a rare public rebuke of the sitting president from his predecessor. Photograph: Rhona Wise/AFP/Getty Images

A new phrase has entered the Donald Trump lexicon. “Obamagate” has been tweeted and retweeted multiple times by the US president of late, prompting widespread speculation about the meaning of the term.

The emergence of the US president’s new attack line has coincided with more public interventions by his predecessor since he endorsed Joe Biden’s White House run last month.

1 Irish tourists excluded from visiting Greece and Croatia
2 We need to pay very close attention to what is happening in Britain now
3 Sideline Cut: Vignette shows why Bird is the true shark in The Last Dance
4 Taoiseach has confirmed schools will reopen at the end of August
5 The strain is starting to tell on Brendan O’Connor
6 Michael Smurfit: ‘I asked Trump to invite me to the White House for my 80th birthday’
7 ‘Wiggle like a snake, waddle like a duck’: Hucklebuck singer Brendan Bowyer dies at 81
8 Derek Chauvin charged with murder in connection with death of George Floyd
9 Turbocharge your barbecue: Tips from the pros for cooking over flames
10 Trump says, ‘I have the best words.’ Now this comedian’s going viral for lip-syncing them
11 Why it’s important to get back to basics and learn to walk (properly) again
12 Higgins: ‘This is very, very different to 2008 ... we need radical thinking’
13 Garda to scale down Covid-19 enforcement for June bank holiday
14 Quarantine will cease within fortnight, Ryanair CEO claims
15 Boris Johnson had little choice but to back Dominic Cummings
16 All students will not return to school even if social distancing relaxed – McHugh
17 The Mayo man in New York teaching fitness classes from his rooftop
18 Small businesses are cannon fodder in zealous anti-virus experiment
19 Rise in pension age poses potential problem in coalition talks
20 ‘Do I really care?’ Woody Allen comes out fighting
21 Minnesota police release CNN reporter arrested live on air
22 French Custard Flan: Pastry plus custard should not taste this good
23 Luke Kelly sculpture on Sheriff Street vandalised for fifth time
24 Tax and the Pandemic Unemployment Payment: Your questions answered
25 What exactly will happen in phase two of easing restrictions?
26 Galway shuts down popular tourist spots and beaches over Covid-19 concerns
27 Sil Fox has a point about #MeToo and hashtag justice
28 Household savings soar as consumers stop spending
29 Number of women dying by suicide increased by almost 50% last year
30 New rules for arrivals to Ireland start today - what is changing?
31 Lockdown must be eased to stop Ireland returning to the 1980s
32 Poorest households in Ireland see biggest increase in Covid-19 cases – CSO
33 Lady Gaga: Chromatica review – A star is reborn in this return to fully fledged pop
34 Irishwoman in New York: I didn’t fear getting Covid-19 but I should have
35 Q&A: How many days a week will children be able to attend school from late August?
36 From Marianne to Claudia Winkleman: The rise of the lockdown fringe
37 Universities are preoccupied with market growth as if educators were stocks and shares
38 Covid-19: People should keep record of who they meet to help contact tracers
39 Private hospital care expected to resume in July but bitterness over State deal remains
40 Private hospitals ‘takeover’ by State will not be extended past June
Real news has value SUBSCRIBE