No quick fix for Trump on reshoring pharma from Ireland 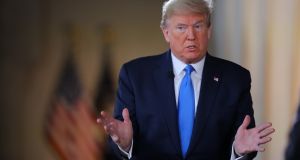 Ireland’s pharmaceutical sector remains confident of its strength in the face of US president Donald Trump’s latest comments about bringing medicine production back to the US, but not complacent. Photograph: Oliver Contreras / EPA

Ireland’s pharmaceutical sector remains confident of its strength in the face of US president Donald Trump’s latest broadside, but not complacent.

Ireland Inc found itself in the uncomfortable position of being bracketed with China as the US president spoke of countries on which the US was dependent for supplies of medicines.

“It’s not only China,” he said in a town hall-style interview with Fox News from the foot of the Lincoln Memorial in Washington DC, “you take a look at Ireland – they make our drugs. Everybody makes our drugs except us. We’re bringing the whole supply chain back.”

This is not the first time that Ireland has found itself on the president’s radar in his on-again, off-again battle of wills with America’s pharmaceuticals sector. As recently as March, when Mr Trump first came under pressure over the growing impact of Covid-19 in the United States, he used a White House press conference to announce that his administration was looking at ways of bringing production of pharmaceuticals and medical devices back to the US.

“We have to be able to take care of our country,” the president said.

In the meantime, the US has rapidly become the country worst affected by coronavirus, with almost a third of worldwide cases – almost five times as much as its nearest contender – and over quarter of global deaths, increasing pressure on the US president over the framing of policy to address the crisis.

Not for the first time, Mr Trump’s has chosen attack as the best form of defence, keeping one eye also on the looming presidential election in November.

While alert to the chilling influence that presidential pronouncements can have in corporate boardrooms, senior figures in Ireland’s pharma sector note that the big US pharma companies have more solid foundations in Ireland than might be realised in the White House. But they are not so confident as to stand up publicly to the US president, with no one prepared to comment on the record outside a brief statement from IDA Ireland.

It said: “Ireland’s combination of track record, skills availability, manufacturing quality, consistent pro-enterprise policies, high regulatory standards and access to the European Union, is a mix that appeals to many companies.

“Companies based in Ireland are at the cutting edge of developing and manufacturing complex oftentimes life-saving drugs for patients which are exported throughout the world.”

The issue for the US president is that pharmaceutical investment is less mobile than most. You don’t just ship drug manufacturing equipment anywhere, never mind across international boundaries, and expect to recommence production quickly.

Every a minor change in process, supply chain and logistics requires regulatory clearance. Getting full clearance for a relocation of a plant could take from three to five years. For drugs that can have an effective patent life of a decade or less from the time they actually come on the market – in the absence of patent extensions – the time and cost of dislocation in the prime of a drug’s earning capacity is not worth it.

“Reshoring is not a long-term strategy,” as one insider put it. And to some degree the question is moot: the economic disruption of the Covid pandemic means that few corporations will have the cash to make major investments, at least in the short term.

In the longer term though, there is scope for the president to impact future investment decisions, especially if he wins another term.

Already, his landmark corporate tax reform, together with similar change in the UK, has reduced the advantage Ireland had long held in this area. Several industry sources note that Ireland will have to up its game to remain competitive – both at existing plants and in looking to secure future foreign direct investment.

But, there is a consensus among industry sources and policymakers that there is no quick fix for Mr Trump, even if his comments will play well to key parts of his political constituency and more in the same vein can be expected in the coming months.

For now, it has been left to Ireland’s Ambassador to the United States to publicly state the case for the country.

“The presence of US pharma companies in Ireland is of huge value to those companies as they can access EU and other markets tariff free from Ireland. That is ultimately to the significant benefit of the US economy,” said Dan Mulhall in one of a series of social media postings.

“As we strive to get over this Covid-19 crisis, it will be imperative that we continue to have strong, two-way flows of trade and investment across the Atlantic as a driver of economic recovery in Europe and the United States,” he added, noting that international supply chains have remained “fully intact” throughout the crisis.

Ireland on course to be fastest growing economy in world in 2020 16:06
Penneys reports record sales in Irish stores after reopening 15:47
Aryzta shareholder raises stake in frozen goods business 15:20
Ruling due in May on Leslie Buckley bid to have INM inspectors withdrawn 15:09
No guarantees EU will win Apple Irish tax ruling appeal, says Vestager 14:21