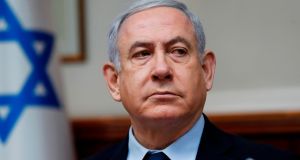 The EU is calculating its strategy on how to respond to a new Israeli government it fears may move to annex territory in the occupied West Bank, igniting a new chapter of conflict in the Middle East.

Over the next 24 hours European foreign ministers will closely monitor the early signals from Jerusalem, where a new government headed by right-wing prime minister Binyamin Netanyahu is expected to be sworn in on Sunday.

They will be looking for signs of how resolute Netanyahu appears to be in following through on his election promise to extend Israeli sovereignty to the Jewish settlements and the Jordan Valley in the West Bank.

After foreign ministers gathered over video conference to discuss the issue this week, the EU’s foreign policy chief, Josep Borrell, said the bloc would use its “geopolitical capacities” to influence the issue.

“We must work to discourage any possible initiative towards annexation,” Borrell said, “using all channels that the European Union and the member states have.”

The meeting revealed a clear view among the majority of the 27 member states that the annexation is against international law and would be a game changer in relations with Israel.

But there was disagreement on what action would be most effective and how it should best be timed, according to diplomats.

The EU has long been split on the issue of Israel. The Republic is in a bloc of like-minded western European countries that have long since lost patience with Israeli policy towards Palestine. But allies of Israel, particularly Hungary, have repeatedly blocked joint declarations on the issue, which require unanimity.

However, the sensitivity of the issue of annexation has forged more consensus than usual.

Opposition to land-grabs in principle is deeply important to many eastern European and Baltic states, who have had heightened fear of Russia forcefully extending its borders since the annexation of Crimea from Ukraine in 2014.

“It’s about precedent,” one official said. “Annexation would change the relationship.”

The Republic and its like-minded group, including France, Belgium, and Luxembourg, are keen to deter Israel from going ahead with the annexation. Other countries have a more cautious approach, and have doubts about the efficacy of threats.

To straddle this divide, it’s likely that when Borrell makes his first phone call to the new Israeli foreign minister, he will not be confrontational. He will emphasise the importance of a close relationship, and in this context stress that the Israel-Palestine peace process is a priority for the EU, and that it continues to support a two-state solution.

The annexation is seen as a major threat to peace and the two-state idea, as it would take in areas that Palestinians hope would form part of a future state. Netanyahu has not set a deadline for the move, but emboldened by tolerant signals from the US, has set July 1st as the starting point for cabinet discussions on the plan.

Yet behind the scenes in Brussels there is already consideration of what pressure points are available to be used if needed.

Israel has a privileged relationship with the EU: its goods are subject to preferential tariffs under the EU-Israel Association Agreement, and Israel participates in the research funding scheme Horizon 2020.

Roughly 10 states have already asked the EU’s diplomatic service to analyse the relationship with Israel and draw up an “options paper” of actions that could be taken against Israel.

Short of outright sanctions or decisions that need unanimity, a range of responses are available. Borrell could take a harsher line in his diplomacy. Away from politics, annexation could also have legal implications in technical areas of trade, such as in rules of origin.

The next moves all come down to how events unfold in Jerusalem and the new government’s signals of intention.

In the next 24 hours “anything could happen”, a European official said.