Pompeo’s trip to Israel is a powerful statement of intent

In-person meeting with Netanyahu underlines US support for annexation plan 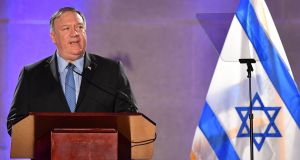 US secretary of state Mike Pompeo: Israeli visit is his first international trip since the outbreak of the coronavirus pandemic. Photograph: Mandel Ngan/AFP via Getty Images

US secretary of state Mike Pompeo will make his first international trip since the outbreak of the coronavirus pandemic when he visits Israel on Wednesday.

The destination for his first trip since March says a lot about America’s foreign policy priorities.

The Israel-United States relationship has flourished under the current administration in Washington. President Donald Trump’s decision to move the US embassy from Tel Aviv to Jerusalem in 2017 was one of several pro-Israel moves welcomed by Israel’s prime minister Binyamin Netanyahu, a close ally of Mr Trump.

The subsequent withdrawal of funding for the UNRWA, a UN agency that helps Palestinians, and America’s declaration that Israeli settlements in the West Bank were not inconsistent with international law, stoked alarm from other global players including the European Union.

Ostensibly, the purpose of Pompeo’s visit is twofold. The secretary of state will discuss efforts to combat coronavirus, and Iran’s destabilising behaviour in the region, according to the US State Department.

But the topic on everyone’s mind will be the incoming Israeli’s government’s plan to annex land in the West Bank – a reality brought home to senior State Department officials as they faced a barrage of questions about Netanyahu’s planned annexation at a briefing for journalists in Washington ahead of the visit.

A pledge to annex parts of the West Bank was included in the coalition deal agreed by Netanyahu and his former rival Benny Gantz last month – an agreement that brought to a close months of political uncertainty and avoided a fourth general election.

The deal includes provision for the new Israeli government to advance plans to map parts of the West Bank by July 1st “in full agreement with the US”.

The Trump administration’s Middle East plan, unveiled in January, contains a conceptual map that would formalise Israeli control of settlement lands. Announcing details of the plan alongside Netanyahu in the White House, Trump hailed the proposal spearheaded by his son-in-law Jared Kushner as a “big step towards peace”, despite its swift rejection by Palestinians.

Pompeo has already indicated that the US will approve the Israeli government’s proposal if it adheres to the Trump administration peace plan.

The secretary of state is due to meet both Netanyahu, who will retain the premiership for the next 18 months, and Gantz, who will then assume the mantle. His arrival on Wednesday has already delayed the swearing-in of the new unity government by a day.

The optics of the US’s most senior diplomat meeting the two leaders of the incoming Israeli government at a time when a global pandemic has made in-person meetings a rarity will be a powerful symbol of US support for the new government.

The timing of the meeting may also indicate an urgency on the part of Netanyahu to move forward with his annexation plan before November’s US election. Former US vice-president Joe Biden, the presumptive Democratic nominee, recently warned that he sees the annexation of settlement territory as a threat to the two-state solution, which would establish an indepedent Palestinian state alongside Israel.

In the immediate term, attention will focus on the details of Israel’s plans and whether they diverge from the Trump proposal for Israeli sovereignty over 30 per cent of the occupied West Bank and the all-important Jordan Valley.

The next step will be how the international community reacts. Ireland was among the countries to denounce the inclusion of the annexation plan in the Israeli government formation document.

Tánaiste Simon Coveney noted in a strongly worded statement that the “annexation of territory by force is prohibited under international law, including the UN charter”.

A move by the EU to impose sanctions on Israel would be difficult given the divisions among member states on the Israeli-Palestinian issue. Jordan and other Arab neighbours in the region have also warned of consequences.

The prospect of renewed violence in the Middle East is something Trump may not have bargained for when he signed off on the so-called “deal of the century” in January.

‘Paradise’ lost for walkers as Phoenix Park reopens to traffic

1 Coronavirus: One death, 25 new cases reported in State
2 Children who go abroad must self-isolate for 14 days before return to school in September
3 Johnny Depp: Ex-wife or friend defecated in bed in ‘fitting end’ to marriage, court hears
4 Judge gives landlord a week to halt Covid-19 parties near UCC
5 The more London’s lockdown eases, the clearer the crisis becomes
Real news has value SUBSCRIBE