Mayor Bill de Blasio joins initiative, described as bid to show president ‘what he does not understand’ 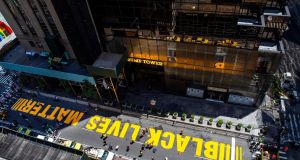 The words “Black Lives Matter” have been painted in large yellow letters on the street outside Trump Tower in New York, the latest flare-up in a years-long feud between president Donald Trump, who rose to fame as a Manhattan real estate developer, and Mayor Bill de Blasio.

Mr de Blasio, who briefly joined activists and city workers to paint the block of Fifth Avenue between 56th and 57th streets in Manhattan, made his intent clear before he grabbed a roller.

The mayor went on to help fill in the bottom of the “L” in “Lives,” as a number of people surrounded him chanting “Black lives matter” and “No justice, no peace”, though a few others nearby also shouted insults critical of him and his administration.

Since winning the presidential election in 2016, Mr Trump has increasingly clashed with officials in his former home state, including not only Mr de Blasio, but Manhattan’s district attorney, who issued a subpoena for eight years of Mr Trump’s business and personal tax records. On Thursday, as the painting began, the Supreme Court ruled that Trump could not shield his financial records from New York prosecutors.

The public art project was announced last month, and city officials have presented its location as a direct rebuke of Mr Trump, who has repeatedly disparaged those protesting against systemic racism and police brutality in recent weeks.

“The president is a disgrace to the values we cherish in New York City,” a spokeswoman for Mr de Blasio said in a statement at the time. “He can’t run or deny the reality we are facing, and any time he wants to set foot in the place he claims is his hometown, he should be reminded Black Lives Matter.”

Mr Trump appeared to take the bait, with the city’s announcement of the painting provoking an inflammatory response from the president that tried to play on tensions between Black Lives Matter protesters and the New York Police Department.

Mr Trump and Mr de Blasio have sparred repeatedly in recent years. The mayor once said that New York would not “welcome back” Mr Trump, who was born in Queens, after his presidency ended. Months later, the president, who has called Mr de Blasio “the worst mayor in America,” switched his primary residence to Florida.

The public battle between the two intensified after Mr de Blasio announced his Democratic presidential bid last year. The mayor made Mr Trump’s behaviour a focal point of his campaign, and the president repeatedly derided the mayor’s hopes for higher office.

As the work got underway on Fifth Avenue, activists, reporters and onlookers milled around, with some occasionally shouting criticism of Mr Trump.

Sapur Postell, 65, who was sitting on a concrete barrier observing, said he had come from his home on Staten Island to witness the phrase being painted.

Mr Postell said that the project had a deep meaning for him because he was a descendant of people who had been enslaved, and that he hoped it would catch the president’s attention.

“Hopefully, the guy will look out the window and rethink,” Mr Postell said. “But I doubt that.”

The project was not met with universal approval and some gathered around the artwork to criticise the mayor and his response to the president.

Juliet Germanotta (38) said she came specifically to jeer Mr de Blasio, whom she accused of ordering the painting as a way to support Joe Biden, the presumptive Democratic nominee for president.

Ms Germanotta, who in 2018 planned to run for Congress in Wisconsin, said that she planned to vote for Mr Trump in November, and that she objected both to the painting’s location and its message. But she also said that she did not think people would have to look at it for long, anyway.

“This is going to get painted over in a day or two by people who love America,” she said.