US Politics: Ineffectual president will likely be succeeded by more diligent anti-liberals 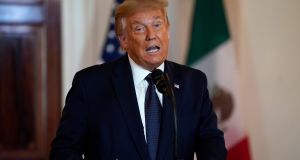 US president Donald Trump at the White House on Wednesday. Photograph: Evan Vucci/AP

These are far from certain to be Donald Trump’s last months in the White House. The US president’s deficit in national and state polls is daunting but recoverable. His opponent, Joe Biden, has profited from an inconspicuousness that cannot last until the November election. One external shock – a military skirmish, say, or a Covid-19 vaccine – and this campaign would be upended, to who knows whose favour.

All of that stipulated, it is not rash to ponder the future of the Republican Party after Trump. And to sense that his threat to liberalism has been an amateur version of what is to come.

That Trump’s successors will retain the substance of his views, even harden them, is plain enough. A base that is still mesmerised by his nativism will punish much deviation from it. If anything new does emerge, however, it will be an emphasis on governmental competence. Its absence has been the salvation of liberals in recent years.

Before the coronavirus pandemic, Trump’s impatience with detail and bureaucratic process had benign results. It stopped him walling off Mexico, repealing Obamacare and ending birthright citizenship. These and other projects required an interest in the mechanics of governance that Trump struggles even to feign.

And so, outside of foreign policy, where the president has a freer hand, little of his populism survived first contact with Washington. With both houses of Congress on his side, his legislative “coup” was a tax cut that was truer to supply-side conservatism than to his more statist variant. Democrats might even look back at the Trump years as a near miss, then, more disturbing in intent than tangible legacy.

It is the next iteration of populism that should trouble them. Those who are expected to jostle for the Republican candidacy in 2024 are of Trump’s persuasion, but not of his background. With rare exceptions – the Fox News host Tucker Carlson is one – none is a celebrity or political neophyte.

Most are more culturally conservative than the president and all are better-equipped to turn their instincts into law. Even those who do not emerge as the party’s leader will help to shape the opposition to a Biden White House.

This, far more than Trump, is the liberal nightmare: a populist agenda in the hands of insiders. As long as it was wild cards and eccentrics who espoused these views – Sarah Palin, the former Alaska governor, was a droll example – they were more or less containable. Lacking the guile to navigate Washington’s checks and balances, populists would be, as Trump now seems, in office but not in power.

The trouble starts when those with institutional knowledge embrace the same programme. And that trouble is coming. Senators Cotton and Hawley, the two youngest in that gerontocrat’s chamber, constitute the vanguard.

If I say that Hawley, who wishes to abolish the World Trade Organisation, is the softie, you have a sense of their zeal. Cotton does not want young Chinese studying hard sciences at US universities (Shakespeare is fine). Last month, he caused a rumpus at the New York Times with an incendiary column about the race protests, making a rightwing folk hero of this slightly rigid man.

Such high-jinks will strike some as all too consistent with the president’s loud-but-ineffectual style. The difference is that both Cotton and Hawley passed through establishment careers (the armed forces and the law) before entering professional politics.

They traffic in co-sponsored legislation and diligent committee work, not tweets. They are steeped in the institutions they propose to transform. And these are perhaps the least seasoned of those mooted for a Republican run in 2024. US liberals have not had to contend with the fusion of populist ideas and operational nous. That luck seems unlikely to last.

As his hold on office loosens, Trump can count some moderate Republicans among his tormentors. Groups such as Right Side and the Lincoln Project are campaigning for a Biden victory in November. The polls suggest they will get their way.

Reclaiming what then remains of the Republican Party, which could lose the Senate, not just the White House, is much the grander challenge. History might record that Trump’s role was to hook his party on a set of ideas for a generation. Putting them into effect was always going to be work best done by less spectacular but more disciplined cadres.

Dismayingly for liberals, they exist. – Copyright The Financial Times Limited 2020