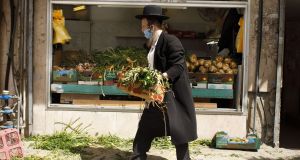 A man wearing a protective face mask carries a box of fresh vegetables during lockdown in the sealed-off ultra-Orthodox town of Bnei Brak, a coronavirus hotspot in Israel. Photographer: Kobi Wolf/Bloomberg

“Why is this night different from all other nights?” is the question read from the Haggadah, the story of the exodus from Egypt, as Jews around the world gather for the traditional Seder night, heralding the start of the one -week Passover holiday.

Seder night this year falls on sundown Wednesday and, for all the wrong reasons, this will be a Seder night to remember, markedly different from all other Seder nights.

The Passover story involves 10 miraculous plagues that saved the children of Israel; this year Jews are praying for the end of a contemporary plague.

Passover is the quintessential Jewish holiday for family gatherings, as a dozen or more relatives and friends gather around the Seder table to recount the exodus and celebrate the festival of freedom. But in most countries, due to coronavirus restrictions on social gatherings, Passover 2020 will be an isolated affair, and nowhere more so than in Israel.

The government has made it clear that Seder night must be strictly limited to the nuclear family residing in the house: even grandparents and children living elsewhere will not be permitted to join their relatives.

Fearing that Passover night gatherings will lead to a spike in coronavirus infections, police will enforce a strict nationwide curfew on Wednesday night. Cars leaving cities will be stopped and occupants will have to justify their journey and police will also be conducting patrols in unmarked vehicles to catch drivers attempting to violate the stay-at-home orders.

“Especially on Seder night we don’t want people moving around from one family to another. As much as it wrings our hearts, this year Seder must be held with only the nuclear family,” he explained.

Secular families will be using social networking platforms, such as Zoom, to conduct virtual Seders but observant Jews are not permitted to use electric devices on Seder night, similar to the Jewish Sabbath.

Israel has already sealed off the ultra-Orthodox town of Bnei Brak , a coronavirus hotspot , and paratroopers drafted to the city are working around the clock to ensure the residents receive enough matzah unleavened bread and 1,000 tons of kosher-for-Passover food ahead of the holiday.

Observant Jews don’t eat bread products over Passover and some even change all their plates and kitchen utensils for the holiday.

Observant Jews in Israel will have to forego a number of customs associated with Passover this year. Pots and pans are traditionally immersed in huge vats of boiling water in religious neighbourhoods ahead of the holiday to make them usable over Passover and any remaining bread products are set on fire in a pre-holiday ceremony. None of this is happening this year as gatherings of more than two people are prohibited.

“We survived Pharaoh, we’ll survive this too,” is a common saying in Hebrew when faced with any kind of difficulty. With Passover approaching and the coronavirus raging, the statement appears more relevant than ever this year.