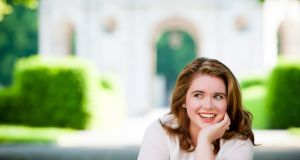 Tara Erraught: was rehearsing at the Met when, ‘after four and a half week’s rehearsals they cancelled at 1.15pm on the day of the opening night’

One aspect of the Covid-19 story is the same everywhere. It is the least well-off who are suffering and will suffer the most. In Ireland, artist lobby group the National Campaign for the Arts has long maintained – without official contradiction – that government spending on culture and the arts languishes near the bottom when compared with our EU neighbours and that Irish arts practitioners are among the less well-off.

It’s 10 years since the arts councils in Dublin and Belfast published The Living and Working Conditions of Artists in the Republic of Ireland and Northern Ireland. The information compiled and analysed by Clare McAndrew and Cathie McKimm still makes for sobering reading.

The Arts Council’s grant-in-aid from the government was €81.6 million in 2008. For 2020 it is €75 million. So it’s hardly surprising that the situation has continued to be difficult. The Central Statistics Office noted fourth quarter average earnings in arts and entertainment in 2018 at €496.83 a week (€25,835.16 a year) with only workers in accommodation and food earning less. Workers in the arts earn just two thirds of the national average.

Many arts professionals live precarious freelance lives and, just like other self-employed people in the current Covid-19 lockdown, have found themselves with all immediate work opportunities wiped from the slate.

Nothing illustrates the situation better than a personal story. London-based Belfast cellist Jonny Byers, a member of the Irish Baroque Orchestra (IBO) as well as of a number of Britain’s leading period performance orchestras and ensembles, told me that his last concert was on March 3rd, when he performed in a Beethoven symphony cycle in Chicago with John Eliot Gardiner and his Orchestre Révolutionnaire et Romantique.   His diary has been wiped clean up to August, when he is due to play with The English Concert in the BBC Proms. Everything after that, he says, “is up in the air”. The Proms concerts, due to start in mid-July, have to be in doubt, too, given that a range of events have already been cancelled beyond that. English National Opera, the Metropolitan Opera in New York and the Wigmore Hall in London have all cancelled the remainder of their seasons.   Through The English Concert’s one-to-one sessions, Byers is about to begin giving online coaching. It’s free to the end-user, though the tutors are paid. He is based in London and has applied for Britain’s universal credit welfare scheme, and is waiting to hear back about the UK government’s 80 per cent income support for self-employed workers. He’s been paid just a single cancellation fee. He feels “confused, anxious, nervous”, and though he thinks positive things may come out of the crisis, he is fearful of the damage that could be done to live music-making in concerts.

Peter Whelan, artistic director of the IBO, is also based in London, though he was in Bonn on the first day of rehearsals for a Beethoven project when Germany’s lockdown hit on March 11th. He’s still hoping to be able to work at the Marlboro Festival in Vermont in the US in July and August, though the fate of this year’s festival is under ongoing review. He’s keeping busy, and his online activities include a multi-tracked performance of an aria from Bach’s Cantata No. 149, Man singet mit Freuden und Sieg as well as some teaching for London’s Guildhall. He has not yet applied for any income support, but is well aware of hardship, and mentions a good friend who is a clarinettist with a big family and is now working at Waitrose supermarket. He’s worried about the future of the music industry, in which, as with most of the arts, everything always seems to be on a knife-edge. “The return to normality,” he says, “might take longer than we think.”

That long-term damage is what seems to worry mezzo-soprano Tara Erraught the most; the careers that will never recover, the cultural institutions that will go under. Even the traditionally well-off Metropolitan Opera in New York is now facing a Covid-19 generated black hole of around $60 million.

Erraught was rehearsing the title role in Rossini’s La Cenerentola at the Met when, “after 4½ week’s rehearsals they cancelled at 1.15pm on the day of the opening night”. She signed the contract for the production in 2013, but she left last month without any fees, because none of the shows had actually taken place. Her last paid work was the Irish Baroque Orchestra’s Tenducci project at the beginning of February.

Erraught’s worries are not in the first instance about the opera houses and concert halls of Germany and Austria, with their solid public funding, but about how less financially stable institutions “will bear the burden of what’s happened”. She blows hot and cold about how much of her immediate work – in productions in Berlin (Rossini’s Barber of Seville, Mozart’s Don Giovanni) and Munich (Gluck’s Alceste, Mozart’s Così fan tutte and Haydn’s Orlando Paladino) – will actually survive.

Her big frustration is not knowing what’s going to be next, what she needs to be working on. “What can you do only wait? I’m not particularly panicked, and at the same time I’m slightly anxious. All I’ve ever done is sing. It’s something I need to do. At this stage I’m getting itchy. I need to get back. Even into a rehearsal.”

I asked each musician for a piece of music for the time we are living in. Byers suggested Beethoven’s symphonies. Erraught offered two, Riverdance (she was at the 25th anniversary production in New York’s Radio City Music Hall) and Schubert’s haunting song, Nacht und Träume (Night and Dreams). And Whelan suggested Bach’s Cantata No 8, Liebster Gott, wann werd’ ich sterben, “Super comforting. A good meditation.”