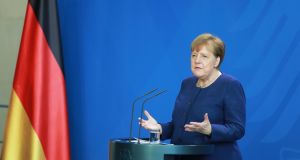 Chancellor Angela Merkel has said it would be “unwise” to lift Germany’s lockdown on Monday as some European countries began considering such a move, with Austria signalling an ease in restrictions and Norway saying its outbreak was “under control”.

Ahead of key EU finance minister negotiations on Tuesday, Dr Merkel described the pandemic as the EU’s greatest ever test, and committed Berlin to a post-pandemic stimulus programme, while maintaining opposition to a common EU debt instrument, so-called coronabonds.

Austrian chancellor Sebastian Kurz has promised a “resurrection after Easter” in the Alpine republic – provided citizens continued to limit their movements in the coming days.

As face masks became mandatory in Austrian supermarkets on Monday, the provisional plan foresees smaller shops reopening in a week’s time – April 14th – along with DIY stores and garden centres.

Austrian hair salons and shopping centres will be allowed to reopen on May 1st and cafes and restaurants in the middle of the month, as will schools. A ban on public events will remain in place until July.

Dr Merkel acknowledged as much in Berlin but said Germany would keep restrictions in place at least until April 19th.

“I can say, as a freedom-loving citizen in the 30th year of German unity, that we will return to our free lives as soon as the health situation allows,” she said.

Germany’s benchmark, she insisted, is doing whatever is necessary not to overwhelm the health system with new cases.

Dr Merkel said she and her government were thinking “day and night” about how to restart everyday life – and Europe’s largest economy.

“But I would be a bad chancellor if I would set a date already, we cannot do that,” she said, because it would be a “very bad move to push ahead too quickly and have to take everything back”.

Her caution comes amid positive signs on key indicators. The so-called “reproduction rate” – how many others are infected by each person with virus – has dropped in Germany from four to one. Anything under one means the virus has effectively stopped spreading.

Another indicator, the rate at which cases are doubling, has stretched thanks to lockdown measures in Austria from 3.6 days mid-March to 16 days now. Germany’s doubling rate is still at nine days.

As of Monday, Austria had 12,008 confirmed cases and 220 deaths while Germany has nearly 95,400 and 1.434 fatalities, the fourth straight daily drop. The two countries have death rates of 1.8 and 1.5 per cent respectively.

Norway will decide on Wednesday whether to lift its three-week lockdown after health officials said on Monday the rate of infection had plummeted. A Norwegian carrying the novel coronavirus now contaminates on average 0.7 other individuals – down from 2.5 before restrictions.

A spike in deaths over the weekend in Sweden, where far fewer restrictions are in place, has prompted a government rush for emergency rules. Health minister Lena Hallengren admitted “the provisions currently available . . . are not sufficiently powerful”.

The positive trends continued in Italy and Spain on Monday, with Spain seeing its daily death toll fall to 637 from last Thursday’s peak of 950, and the total number of confirmed cases in Italy increasing by 3,599, the lowest daily rise since March 17th.