Coronavirus: Third-level students will not have to sit traditional exams 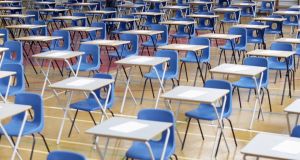 Third-level students will not have to sit traditional end of year exams, with alternative arrangements being put in place by colleges and universities. File photograph: Getty Images

Third-level students will not have to sit traditional end of year exams, with alternative arrangements being put in place by colleges and universities.

Confirming the move on Tuesday, Minister of State for Higher Education Mary Mitchell O’Connor said that instead of written, oral and practical assessments in exam centres, students will be offered online tests, written assignments or rescheduling.

The action will end the uncertainty experienced by thousands of students on the issue as efforts continue to curb public interaction in a bid to snuff out the spread of Covid-19.

Those due to graduate this year are to be prioritised in the new arrangements, although there could be delays for such students, with some students unable to complete programmes or graduate “in the timescale originally expected”.

“Importantly, I would like to reassure students that even though alternative arrangements have been put in place standards will be upheld. We can all be confident that qualifications achieved this year will be valued and regarded exactly as in any other year.”

The measures stress that anyone unable to participate in alternative assessment arrangements will not be penalised and will be given the opportunity to complete their studies at a later stage.

A guidance document published by QQI, the national body responsible for qualifications and quality assurance in higher education and further education and training, on alternative assessments noted the “extreme and unanticipated circumstances”.

“While we cannot yet be certain about the level of impact that Covid-19 will have on the tertiary education system’s capacity to adapt, we are confident that with ingenuity and resolve many learners will be able to graduate this year as planned with trustworthy qualifications,” it says.

The document also notes that the integrity of the new approach is central to the credibility of awards.

“Moving to alternative forms of assessment, such as introducing online assessment in a short timescale, introduces new risks, particularly in a context where both staff and learners have had limited time to prepare,” it says.

Among the suggestions are that institutions document how learner identity will be verified and to determine that submitted work was carried out by the enrolled student.

It says institutions should “reaffirm expectations for learners to behave at all times with academic integrity”, and also acknowledges not all modules are suited to online assessment, for example work placements.

“Given the uncertain duration of the current restrictions, and the potential for increased incidence of illness among student and staff populations over the coming period, it is preferable that assessment and award activities are concluded as soon as possible rather than being deferred,” it says, while also noting the option to defer is reasonable.