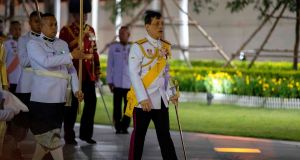 Thailand’s King Maha Vajiralongkorn arrives to pay respects at the King Rama I monument to mark Chakri Memorial Day that honours the founding of the ruling Chakri Dynasty in Bangkok on April 6th, 2020. Photograph: Athit Perawongmetha/AFP via Getty

If the world didn’t already have a musical about an eccentric Thai king, now would be the time to write one.

With much of the globe in coronavirus lockdown, Maha Vajiralongkorn of Thailand is commuting back and forth between his homeland and Germany in a bid to secure the lead role in The Playboy King & I.

On Monday the 67-year-old monarch was expected to preside over celebrations to mark the establishment of the current Chakri family royal dynasty in 1782.

But it was just a flying visit for the controversial ruler, and he was expected to fly afterwards back to Bavaria where he has been a welcome distraction for Germans in the coronavirus crisis.

But even before his 18,000km return trip to Thailand, many Germans have wondered why the Thai king appears to be living in a very different lockdown to them.

While most hotels in Germany have closed, in line with coronavirus restrictions, the king was given special permission to self-isolate with a 20-member harem in the Grand Hotel Sonnenbichl in Bavaria’s Garmisch-Partenkirchen, a winter sport resort.

While Germans are allowed outdoors once a day for a short walk or exercise, the king is jetting around the country on short-hop flights: to Baden-Baden, Dresden, Leipzig and Hanover.

Using a full-sized Boeing 737-800 just for himself, the king is reportedly a fan of “touch-and-go” flights in which the plane takes off again after only a brief touch-down. German aviation experts believe the king is flying the plane himself to keep up the minimum number of flight hours required for a pilot’s licence.

For years as crown prince, Thais have looked on in amazement and amusement at his antics, in particular his push to suppress an image of himself in a crop top with fake tattoos, enjoying an ice cream in a German shopping centre.

He was crowned king last May, nearly three years after his father’s death, in a six-hour ceremony that cost a reported €29 million. Since becoming king, the married monarch took on a royal consort but stripped her of the title again months later for “disrespectful” behaviour to the queen.

His current wife, a former bodyguard, is his fourth. He married his first wife, a cousin, in 1977 and they had a daughter together. At the same time he had four sons and a daughter with a mistress but when he filed for divorce, in 1993, he accused his wife of adultery. When the subsequent marriage to his mistress collapsed after two years, she fled to the UK and he accused her, too, of adultery.

He kept secret his third marriage, to a waitress, until she gave birth to their son in 2005. At the time the prince said he was anxious to settle down and made his poodle, Foo-Foo, a chief marshall in the Thai air force.

A former US ambassador, in a leaked cable from 2007, recalled how, during a musical interlude at a state banquet, the chief marshall, wearing full evening wear, “jumped up on to the head table and began lapping from the guests’ water glasses, including my own”.

Foo-Foo died in 2015 and was given a full-on four-day Buddhist funeral.

Though a constitutional monarch, the king’s estimated fortune of up to €100 billion, combined with stringent lèse-majesté rules, have kept him largely insulated from criticism or financial concerns.

But with Thailand registering 2,220 confirmed cases of coronavirus on Monday, and 26 deaths, reports of the king’s colourful life in Bavaria have seen a Twitter hashtag trending among his subjects: #whydoweneedaking.