May to call for national unity in major Brexit speech 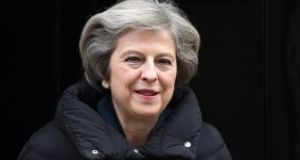 British prime minister Theresa May will use a major speech on Brexit next week to call on Britons to reject the acrimony of last year’s referendum and unite around the vision of a Britain more open to the world, her office said on Sunday. Photograph: EPA

British prime minister Theresa May will use a major speech on Brexit next week to call on Britons to reject the acrimony of last year’s referendum and unite around the vision of a Britain more open to the world, her office said on Sunday.

Mrs May intends to kick off the formal process of negotiating the terms of Britain’s exit from the European Union by the end of March, but has given little away about what deal she will be seeking, frustrating some investors, businesses and politicans.

She is due to make a speech in London on Tuesday before an audience including foreign diplomats as well as Britain’s own Brexit negotiating team and other senior officials, Mrs May’s Downing Street office said in a statement.

It said she would stress the need for British people, who voted for Brexit by 52 to 48 percent in last June’s referendum after a deeply divisive campaign, to unite around common goals such as protecting and enhancing workers’ rights.

“Now we need to put an end to the division and the language associated with it - ‘Leaver’ and ‘Remainer’ and all the accompanying insults - and unite to make a success of Brexit and build a truly Global Britain,” Mrs May is expected to say.

The extracts of Mrs May’s speech did not say whether she would reveal her stance on one of the key questions: whether she will try and keep Britain within the European single market or customs union or, if not, what level of access she will aim for.

The Sunday Times and other newspapers said the speech would signal that Britain was seeking a “clean and hard” Brexit, which would involve leaving the single market and the customs union.

The report cited an unnamed source in Mrs May’s office who said her words were likely to cause a market correction. A spokesman from Mrs May’s office told Reuters the reports were speculation and did not comment further.

The problem for Britain is that the EU is likely to insist on freedom of movement for EU citizens in return for full access to the single market, while many of those who voted for Brexit did so precisely in order to be able to restrict immigration.

Mrs May’s speech will be closely watched by financial markets for information on which of these divergent goals she will prioritise.

After she said in a TV interview a week ago that post-Brexit Britain would not be able to keep “bits” of its EU membership, the pound fell sharply as the comment was interpreted as signalling a clean break from the single market.

In a separate Sunday Times article, Brexit minister David Davis wrote that Britain would consider ways to extend or smooth the exit process to provide certainty for businesses.

“If it proves necessary, we have said we will consider time for implementation of new arrangements,” he wrote.

Downing Street said the choice of venue was to underline Mrs May’s theme of a global Britain.