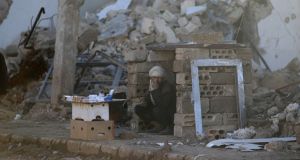 A man sells cigarettes near rubble of damaged buildings in al-Rai town, north of Aleppo on Friday. Islamic State militants launched their biggest attack in months on government-held areas of the Syrian city of Deir al-Zor on Saturday, killing dozens of civilians and government troops, a war monitor said. Photograph: Reuters

Islamic State militants launched their biggest attack in months on government-held areas of the Syrian city of Deir al-Zor on Saturday, killing dozens of civilians and government troops, a war monitor said.

At least six large explosions rocked the city since dawn as the militants clashed with the army and allied forces, the British-based Syrian Observatory for Human Rights reported.

A military media unit run by Damascus’s ally Hezbollah said the army was repelling attacks by the hardline jihadist group along several frontlines, including east of the city and around its military airport.

Islamic State controls most of Deir al-Zor province, which borders Iraq, including more than half the city, and has besieged the remaining government-held areas of the city for nearly two years.

The Syrian government and its Russian ally have made regular aid drops into the encircled zone, where about 200,000 people live, lacking food and medicine.