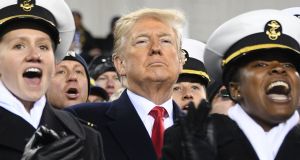 US president Donald Trump: faces difficulty in securing a suitable candidate to work with him as chief of staff. Photograph: Jim Watson/AFP

US president Donald Trump has said he is in the process of interviewing “some really great people” to become the next White House chief of staff, after his top pick for the post declined the position.

Nick Ayers, a 36-year-old political operative who currently works for vice-president Mike Pence, announced late on Sunday he would be returning to his home state of Georgia. A close ally of the president’s daughter Ivanka and her husband Jared Kushner, he was widely expected to be named as John Kelly’s successor.

But in a tweet he said that while it had been an honour “to serve our nation at the White House”, he would be departing by the end of the year. He added that he would still “work with the #MAGA team to advance the cause”, a reference to Mr Trump’s campaign slogan, “make America great again”.

Amid signs that the president is finding it difficult to find a suitable chief of staff a day after he announced that Mr Kelly would be leaving by the end of the year, a defiant Mr Trump hit out at media reports. “Fake News has been saying with certainty it was Nick Ayers, a spectacular person who will always be with our #MAGA agenda. I will be making a decision soon!” he said, stating that he was in the process of interviewing “some really great people”.

Mr Ayers, who may be considering running for elected office, said that he wanted to spend time with his young family.

But his unexpected departure from Washington has highlighted the difficulty Mr Trump may face in securing a suitable candidate to work with him as chief of staff. Mr Kelly, a retired four-star general, took up the position after Mr Trump’s first chief of staff, Reince Priebus, left in the summer of 2017.

Among the names being mooted to replace Mr Kelly are acting attorney general Matthew G Whitaker, trade representative Robert Lighthizer and budget director Mick Mulvaney, though sources close to Mr Mulvaney insist he is not interested in the position. Mark Meadows, a North Carolina congressman and head of the right-wing “Freedom Caucus” in the House of Representatives is also under consideration.

Mr Trump’s third chief of staff will take up the position at a delicate time in the presidency, given signals that the Mueller investigation into Russian interference in the 2016 election may be wrapping up imminently.

New filings related to the Russia investigation on Friday shed further light on the workings of the investigation. Special counsel lawyers said in a filing that Michael Cohen, Mr Trump’s former lawyer, claimed that a Russian official in late 2015 contacted him about setting up a meeting between Mr Trump and Russian president Vladimir Putin.

Mr Trump tweeted after the filings were reported: “Totally clears the President. Thank you!” But senior Democrats suggested over the weekend that the filings indicate a case against Mr Trump, who has frequently lambasted the Mueller investigation as a “witch hunt”. Jerry Nadler, the incoming chair of the House judiciary committee, said Mr Trump had committed “impeachable offences”, though he added: “Whether they are important enough to justify impeachment is a different question.”

Meanwhile Chuck Schumer, the Senate minority leader, and Nancy Pelosi, the top Democrat in the House of Representatives, are due to meet Mr Trump in the White House for discussions on border funding ahead of a possible government shutdown before Christmas. Mr Trump is seeking more than $5 billion (€4.4 billion) in funding for his proposed wall with Mexico, a proposal that has been rejected by Democrats.