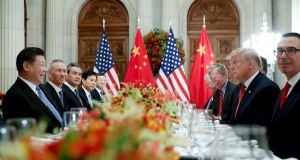 US president Donald Trump has delayed for 90 days his threatened imposition of 25 per cent tariffs on Chinese imports after a dinner meeting with China’s presidentXi Jinping, to give time for negotiations on longstanding trade disputes between the two countries, the White House has said.

Mr Trump said their dinner after the G20 summit in Buenos Aires “was an amazing and productive meeting with unlimited possibilities for both the United States and China”.

A statement by the White House spokeswoman, Sarah Sanders, issued as Mr Trump was on his way back to Washington, listed concessions the Chinese president was said have made, including stopping Chinese exports to the US of fentanyl, a synthetic opioid, and the death sentence for convicted traffickers.

The statement said that Mr Xi, “in a wonderful humanitarian gesture, has agreed to designate fentanyl as a controlled substance, meaning that people selling fentanyl to the United States will be subject to China’s maximum penalty under the law”.

The press statement said Mr Trump would not follow through his threat to raise tariffs on Chinese goods from 10 per cent to 25 per cent in the new year, which he had described as a reprisal for a long history of unfair Chinese trade practices.

There were widespread concerns that such a large hike in tariffs could trigger a serious trade war between the two countries, with devastating results for the global economy.

According to Ms Sanders, Mr Xi agreed that China would purchase “a not yet agreed upon, but very substantial, amount of agricultural, energy, industrial, and other product from the United States to reduce the trade imbalance between our two countries”.

“China has agreed to start purchasing agricultural product from our farmers immediately,” the statement said. Since trade tensions have escalated under Mr Trump, China has radically reduced its import of US soy beans and other farm products, with direct impact on farmers in the US mid-west where Mr Trump has drawn much of his political support.

Ms Sanders said the two leaders had agreed to begin immediate negotiations on “structural changes” on chronic issues of contention, including the practice of forcing US investors to hand over technological knowhow, intellectual property protection and non-tariff barriers to entry for US businesses. The negotiations would also encompass cyber theft, services and agriculture.

“Both parties agree that they will endeavour to have this transaction completed within the next 90 days. If at the end of this period of time the parties are unable to reach an agreement, the 10 per cent tariffs will be raised to 25 per cent,” Ms Sanders said.

The Chinese government also welcomed the outcome of the talks.

“The two presidents agreed that the two sides can and must get bilateral relations right,” Wang Yi, China’s lead diplomat, told reporters in Buenos Aires. “Discussion on economic and trade issues was very positive and constructive. The two heads of state reached consensus to halt the mutual increase of new tariffs.”

Mr Wang did not give as many details as the White House, but said: “China is willing to increase imports in accordance with the needs of its domestic market and the people’s needs, including marketable products from the United States, to gradually ease the imbalance in two-way trade.” - Guardian