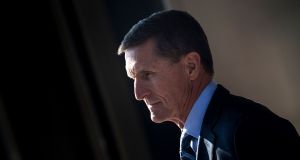 Mr Flynn was a key cooperator who helped the US justice department with several investigations, said prosecutors for Mr Mueller. Mr Flynn sat for 19 interviews with Mr Mueller’s office and other prosecutors and handed over documents and communications, they said.

“His early cooperation was particularly valuable because he was one of the few people with long-term and firsthand insight” into the subject of Mr Mueller’s investigation – Russia’s election interference and whether any Mr Trump associates conspired, prosecutors wrote in a sentencing recommendation memorandum and an addendum that was heavily blacked out.

In particular, they wrote, he may have prompted others to cooperate with the inquiry. “The defendant’s decision to plead guilty and cooperate likely affected the decisions of related firsthand witnesses to be forthcoming,” prosecutors said. They also indicated that Mr Flynn helped with other investigations without revealing details about them. Mr Flynn, who served briefly as the president’s national security adviser, is the only White House aide and the first person from the president’s inner circle to strike a cooperation deal with the special counsel’s office in exchange for a more lenient penalty. He pleaded guilty a year ago to lying to the FBI about conversations he had with the Russian ambassador to the United States at the time, Sergey Kislyak.

“The defendant deserves credit for accepting responsibility in a timely fashion and substantially assisting the government,” prosecutors wrote. The cases of some other former Trump aides caught up in the special counsel investigation are also nearing resolution, marking an active week for Mr Mueller’s inquiry.

By Friday, Mueller’s prosecutors are due to enumerate how they believe Paul Manafort, Mr Trump’s former campaign chairman, violated a plea agreement and separately to outline the extent of cooperation by Michael Cohen, Mr Trump’s longtime lawyer and fixer.

Another longtime Trump associate whom Mr Mueller is scrutinising, Roger Stone, said Tuesday that he had invoked his Fifth Amendment rights in response to a request from Democratic investigators for the Senate Judiciary Committee to hand over documents and testimony relevant to their own Russia inquiry. Mr Stone’s lawyer, Grant J. Smith, said the committee’s request was “overbroad” and stressed that Stone was “an innocent citizen who denounces secrecy.”

The letter was dated Monday, the same day that Mr Trump praised Mr Stone on Twitter for having the “guts” to stand up to Mr Mueller. Mr Stone’s lawyer said that the letter was sent before Mr Trump’s tweet. A grand jury in Washington has investigated whether Mr Stone had any advance knowledge of how WikiLeaks planned to use documents stolen from Democratic computers by Russian agents during the presidential campaign.

Prosecutors said Mr Flynn’s more than 33 years of military service – he was a three-star Army general before being fired as the head of the US defence intelligence agency in 2014 – should be taken into account when Judge Emmet G. Sullivan of the US district court in the District of Columbia sentences him December 18th. But they also noted Flynn should have known better than to lie to the FBI. “Senior government leaders should be held to the highest standards,” they wrote.

Close observers of Mr Mueller’s investigation had hoped his team might provide revealing details about possible cooperation between Mr Trump associates and Russia, but in typical fashion, the special counsel’s office kept its cards closely held. Mr Flynn, who gained notoriety after he left the military for his view of Islamic terrorism as an existential threat to the United States, began advising the Trump campaign in early 2016. About a week after his surprise election victory, Mr Trump named Mr Flynn as his future national security adviser.

During the presidential transition, Mr Flynn discussed with Mr Kislyak a coming United Nations Security Council vote on whether to condemn Israel’s building of settlements. At the time, the Obama administration was preparing to allow a security council vote on the matter.

The two men also spoke about sanctions imposed by the Obama administration on Russia over its election interference in December 2016. Mr Flynn asked that Moscow refrain from escalating the situation, and Mr Kislyak said Russia “had chosen to moderate its response.”

Just days after the inauguration, Mr Flynn was interviewed by the FBI as part of the investigation into Russia’s influence campaign in the 2016 election. During the interview, Mr Flynn lied to agents, a crime that carries up to five years in prison. At the time, the acting attorney general, Sally Q. Yates, warned the White House that Mr Flynn might be compromised by the Russians.

Why Mr Flynn chose to lie about his and Mr Kislyak’s discussions remains a mystery to the FBI officials who investigated the case. Before investigators interviewed Flynn at the White House, he had indicated to a senior FBI official that he knew the United States had been listening to Mr Kislyak’s calls, former law enforcement officials said.

Mr Mueller’s prosecutors gave no indication about why he lied. Mr Flynn’s own memo to seek a light sentence in the case is due by December 11th. – New York Times