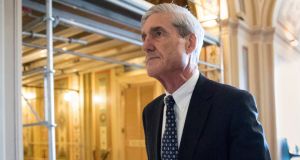 Further insight into special counsel Robert Mueller’s investigation into contacts between Donald Trump’s election campaign team and Russia is expected on Friday with documents to be lodged in courts in Washington and New York.

In Washington, the Mueller legal team is due to file papers outlining the circumstances surrounding the collapse of its co-operation agreement with former Trump campaign manager Paul Manafort.

The former lobbyist, who is in solitary confinement in a prison in Virginia as he awaits trial, had struck a plea deal with investigators. But that collapsed after prosecutors accused the defendant of lying to them, and amid reports that Mr Manafort had been communicating with the Trump legal team about his conversations with Mr Mueller.

These communications are reported to have taken place after Mr Manafort agreed to co-operate with Mr Mueller in September as part of a plea deal.

Mr Manafort’s decision to communicate with the Trump team suggested to some legal analysts that he could be hoping for a pardon from the US president. Mr Manafort had previously been found guilty of witness-tampering, leading to stricter bail conditions.

Mr Cohen is due to be sentenced next Tuesday, but the sentencing memo on Friday is likely to shed more light on his co-operation with investigators.

The developments come after the Mueller team recommended that Michael Flynn, Mr Trump’s former national security adviser, should be spared jail for cooperating with investigators. Mr Flynn, a retired general, was a key figure in the Trump presidential campaign and had a shortlived post as national security adviser before being fired by Mr Trump in February 2017, over his failure to disclose fully the extent of his contact with the Russian ambassador to the United States.

Mr Trump has been uncharacteristically quiet on Twitter in recent days, attending the funeral of former president George HW Bush on Wednesday, and spending Thursday at the White House where he was due to attend two Hanukkah celebrations. The president is said to have provided written testimony to the Mueller investigation team in recent weeks.

Mr Barr, a 68-year-old lawyer, is well-known in Republican circles. He served as attorney general under George HW Bush between 1991 and 1993. Congressman John Ratfcliffe, a Republican from Texas, was also under consideration according to reports.

Mr Trump has yet to appoint a candidate to replace Nikki Haley as US ambassador to the United Nations. Ms Haley announced in October that she would step down at the end of the year, a surprise decision. Heather Nauert, a former Fox News presenter and current state department spokeswoman, has been mentioned as a possible candidate for the position.