‘Trump is a coward’: Republican says he will challenge president for 2020 nomination 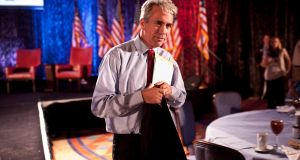 Mr Walsh criticised Mr Trump, who has strong support among Republicans, as a bully who is unfit for office, as he announced his long-shot bid.

“I’m running because he’s unfit,” Walsh (57) told ABC’s This Week programme. “Somebody needs to step up.”

“He’s a bully and he’s a coward and somebody needs to call him out,” Mr Walsh said. “The bet . . . of my campaign is that there are a lot of Republicans that feel like I do. They’re afraid to come forward.”

Asked to respond to Mr Walsh’s criticism of the president and decision to run, Mr Trump’s spokesman replied: “Whatever.”

“President Trump enjoys unprecedented support among Republicans. He has already delivered a long list of incredible accomplishments for conservatives and the country. Republicans are firmly behind the president and any effort to challenge him in a primary is bound to go absolutely nowhere,” Republican Party chairwoman Ronna McDaniel said in a statement.

Mr Walsh won a House of Representatives seat in Illinois as a candidate of the Republican Party’s Tea Party movement in 2010, but he was defeated by Democrat Tammy Duckworth in his 2012 re-election bid. After leaving Congress, he became a Chicago-area radio talk show host.

Bill Weld, a former Massachusetts governor, had been the only Republican trying to unseat Mr Trump, but his candidacy has so far failed to gain traction.

Former US representative and South Carolina governor Mark Sanford said in July he was considering a primary challenge because of the rising federal debt.

Mr Weld, appearing on NBC’s Meet the Press on Sunday, said he welcomed Mr Walsh’s entry into the race and would welcome Mr Sanford as well.

“It can only contribute to more robust dialogue and that will be good for the country,” he said. “We need to assemble rational people.”

Any Republican challenger will face a formidable re-election effort mounted by Trump, who has consolidated his grip on the party’s national and state machinery. A Reuters/Ipsos poll conducted from August 19th-20th showed 87 per cent of Republicans approve of his performance in office.

Mr Walsh said he was undeterred. “I think this thing . . . will catch on like wildfire,” he said.

Mr Walsh sought to address expected criticism about his past affiliation with the Tea Party, a confrontational populist splinter group of the Republican Party.

“There were plenty of times I went beyond the policy and the idea differences, and I got personal and I got hateful,” Mr Walsh said. “I said some ugly things about president Obama that I regret. And, and it’s difficult, but I think that helped create Trump, and I feel responsible for that.

Mr Walsh said his attitude contrasted with what he said was Mr Trump’s refusal to apologise for anything.

“I helped create Trump. There’s no doubt about that: the personal ugly politics. I regret that and I’m sorry for that. And now we’ve got a guy in the White House . . . that’s all he does.” – Reuters